In a 24-hour period we went to two themed ice skating events at two different rinks, and we had a great time.

First: the Friday the 13th Zombie Skate at Dilworth Plaza.

It was Claudia who had put up a bit of a fight about “other zombies”, but she was fine. Their buddy Heather was along with them, they did their own makeup in the cabin before skating, and had hot chocolate and poutine (well, Heather would perhaps prefer brains to poutine between skating sessions.

As we finished doing makeup and headed out to actually skate, I noticed Béla’s hesitation. At that moment, all it was was hesitation, but it soon escalated to full-on shrieking. 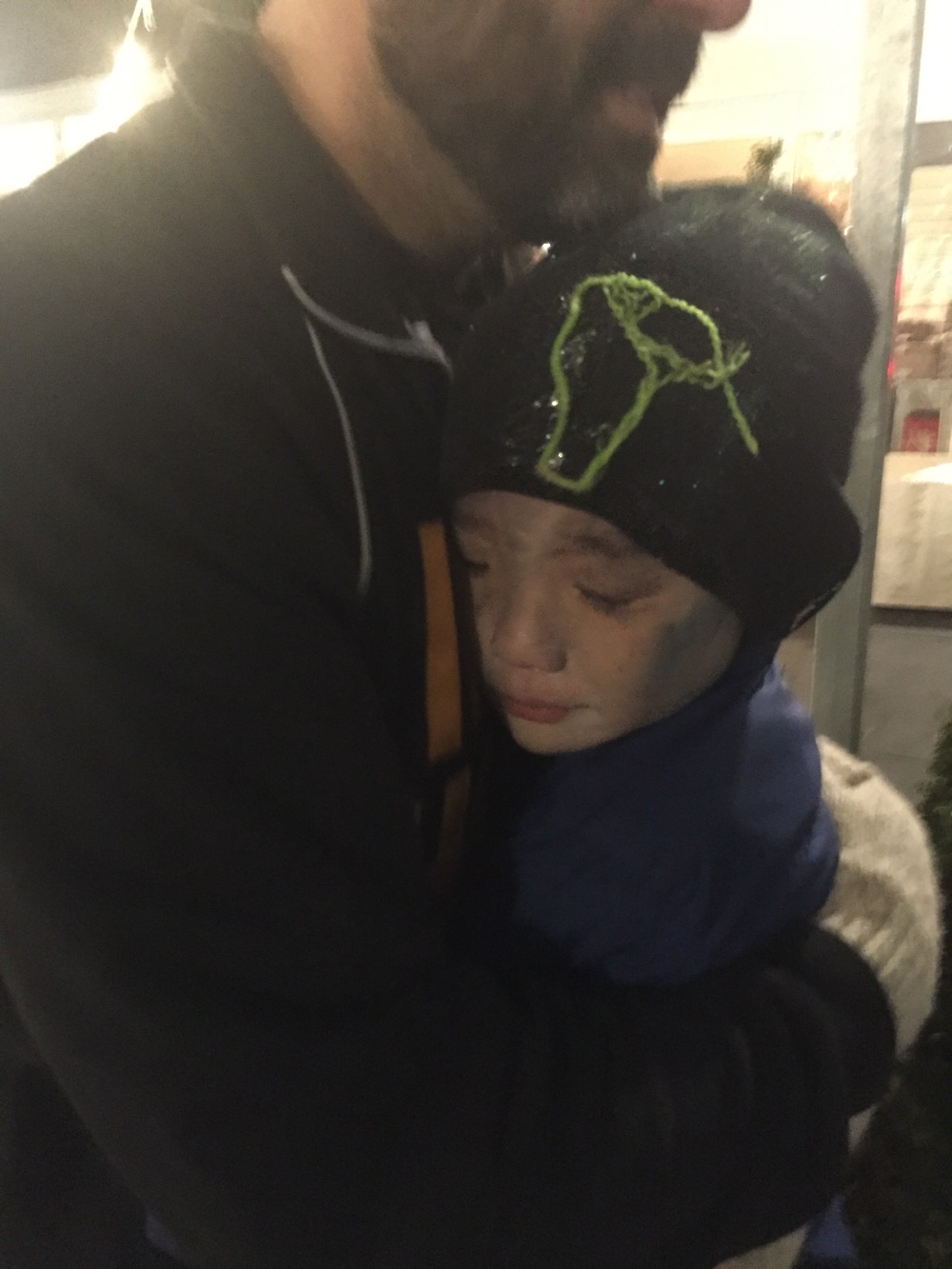 In addition to people who dressed up to come to the event, there were actors from Terror Behind the Walls at Eastern State Penitentiary. Also, I think that some of the regular Dilworth security staff who happened to be good skaters got made up by the Terror crew. Anyway, it was soon apparent that while the gals in the old-fashioned infirmary nurse costumes were not that threatening to Béla, the security guards were.

Then, we narrowed it down to one in particular. 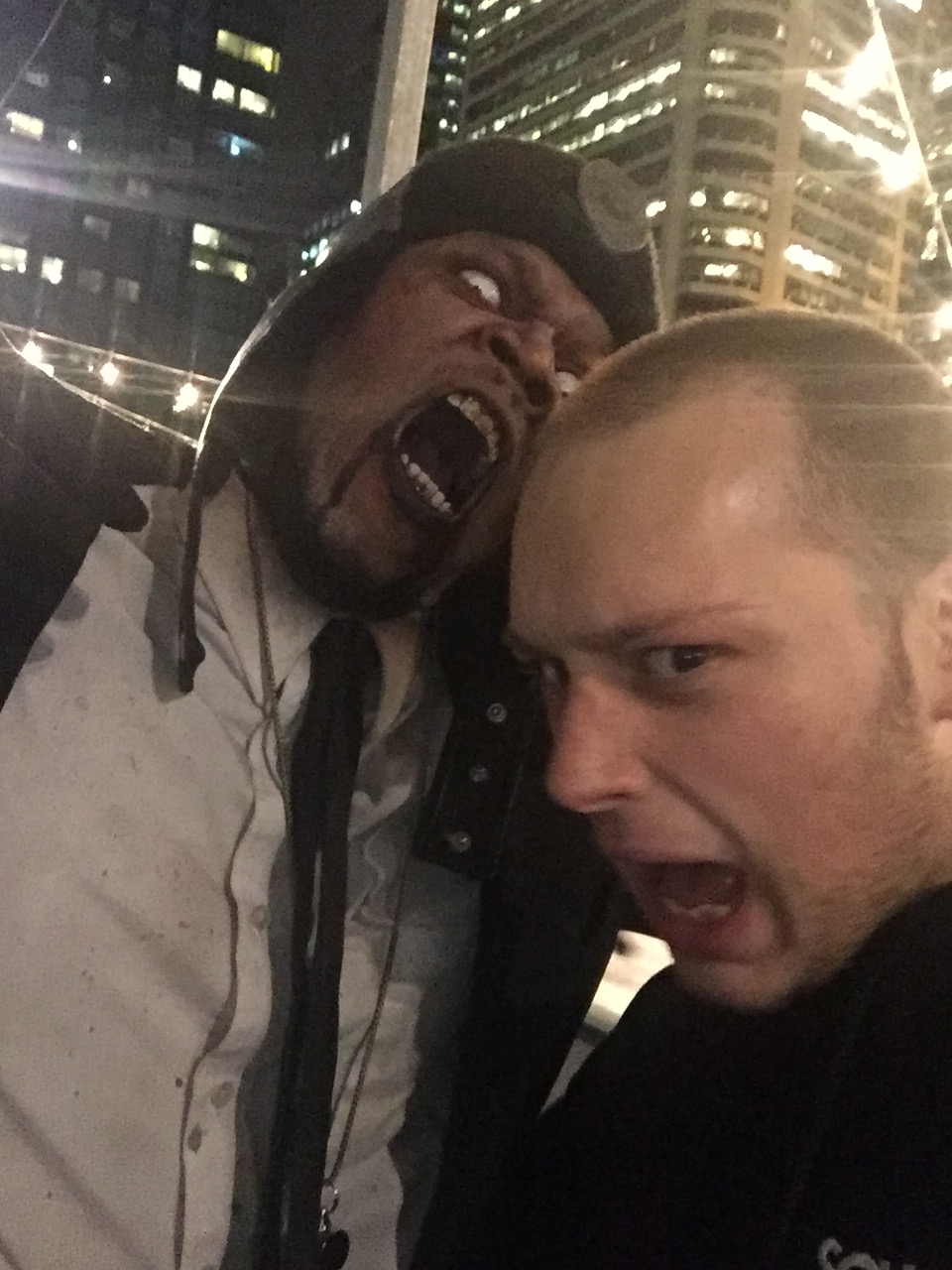 No amount of cognitive therapy in the world was going to make Béla able to deal with these contact lenses. He DID go from absolute full-on screaming, with tears bursting out of his face like diamonds, to just whimpering and hiding behind me — but he did not like this guy at all. The Terror actors are NOT allowed to touch (unless you wear a special glow necklace that cues them that you want to be more scared), and if you say MONSTER BE GOOD, they have to back away from you. Béla did that. Some monsters went cowering; some went, but were clearly put out about it. 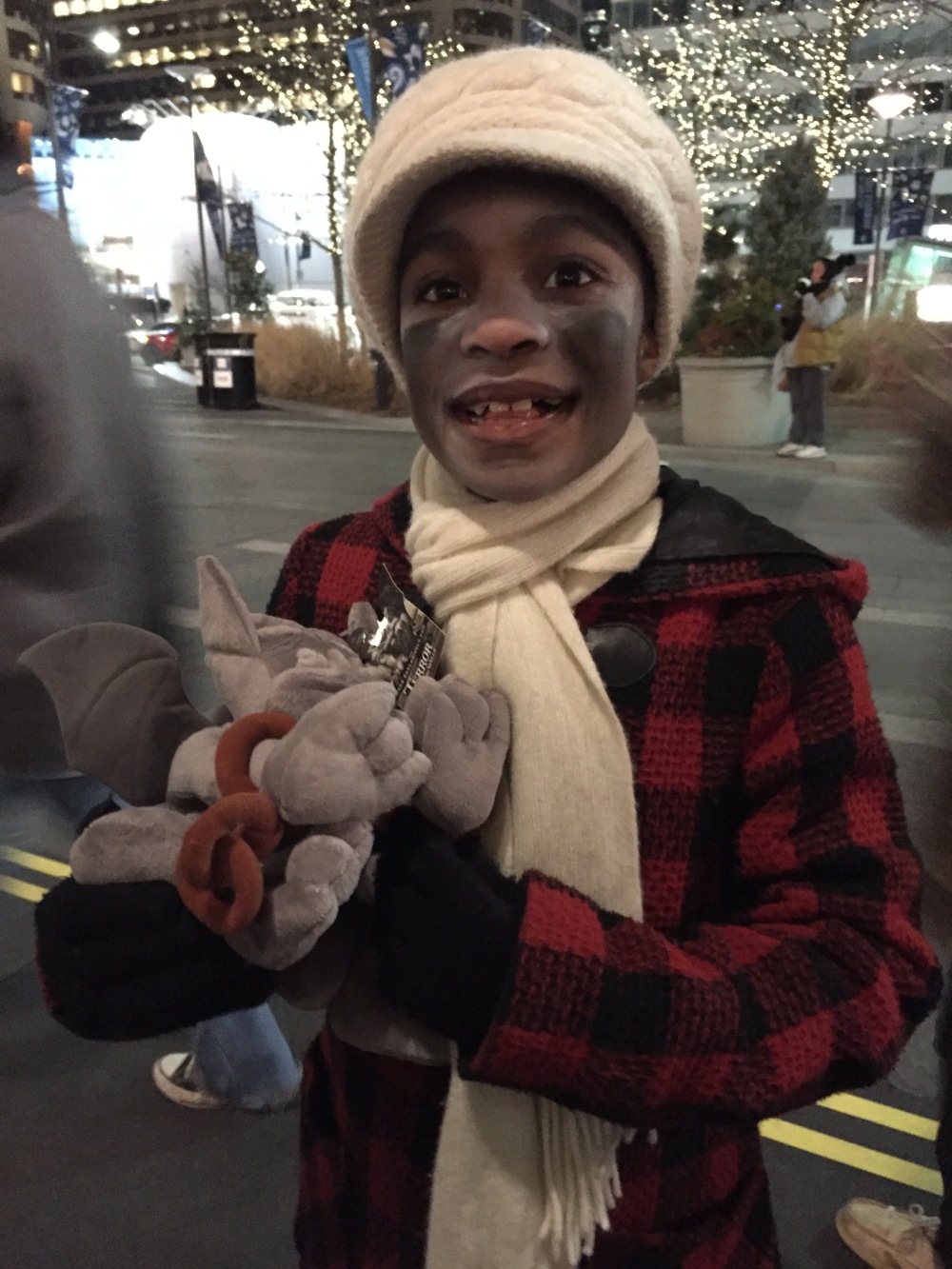 There was a raffle, and Heather won the “scare me more” glow necklace, Tuck and Béla together won enough passes to get the whole family into the tour of the Penitentiary, and Claudia won the LAST stuffed gargoyle that was there that night! His name is Frank.

Home, to bed, up, lessons at School of Rock, and back… to ice skating. This time at River Rink. For Philly Loves Bowie Week.

A woman working for the event broke into tears telling us that the city had officially proclaimed January 6-14 “Philly Loves Bowie Week” from now on. 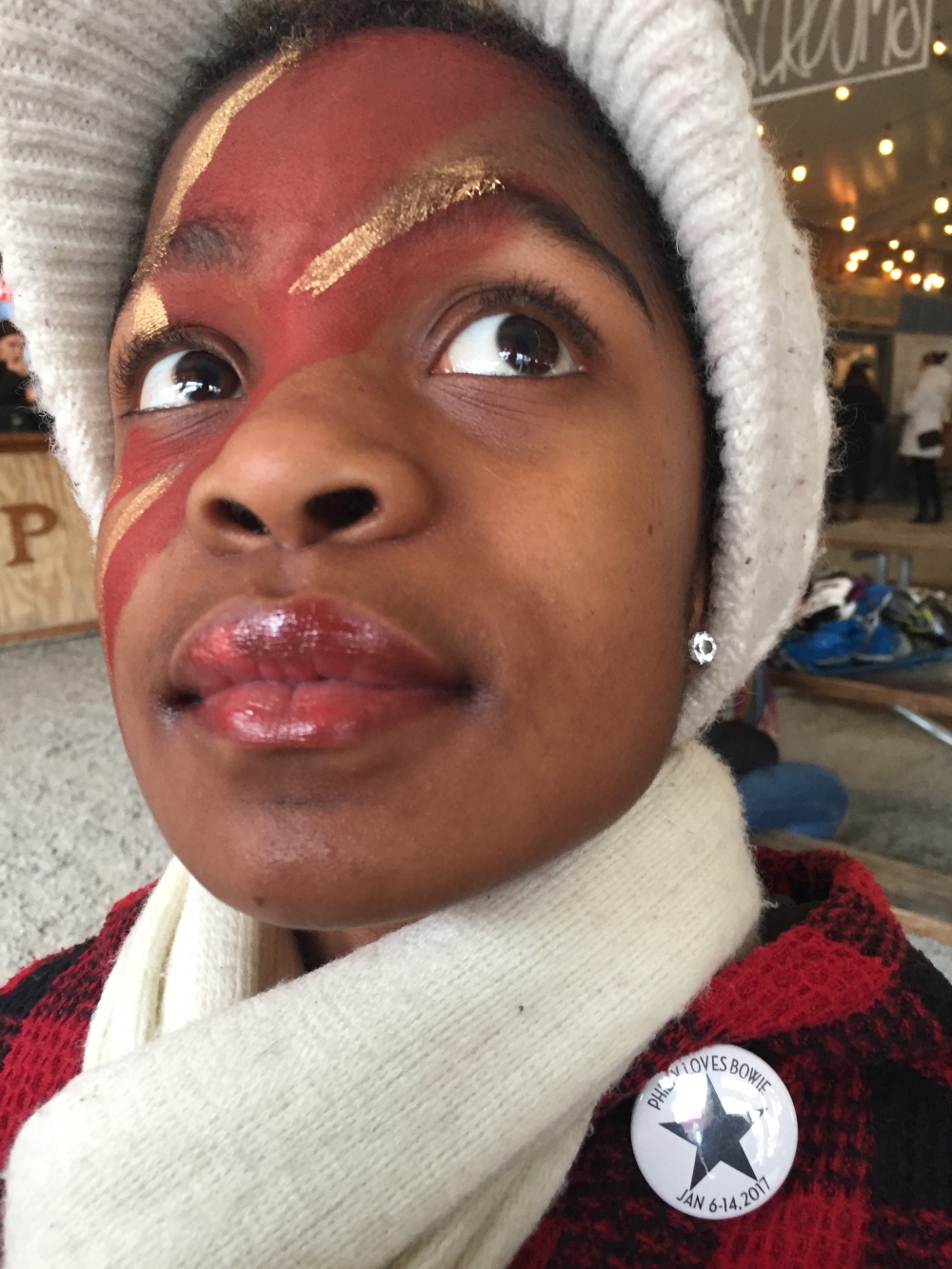 We were both proud and excited to be a part of it.

Since Béla had never made it to the ice during the Zombie Skate, he did for Bowie, wearing our gold Isis wings. 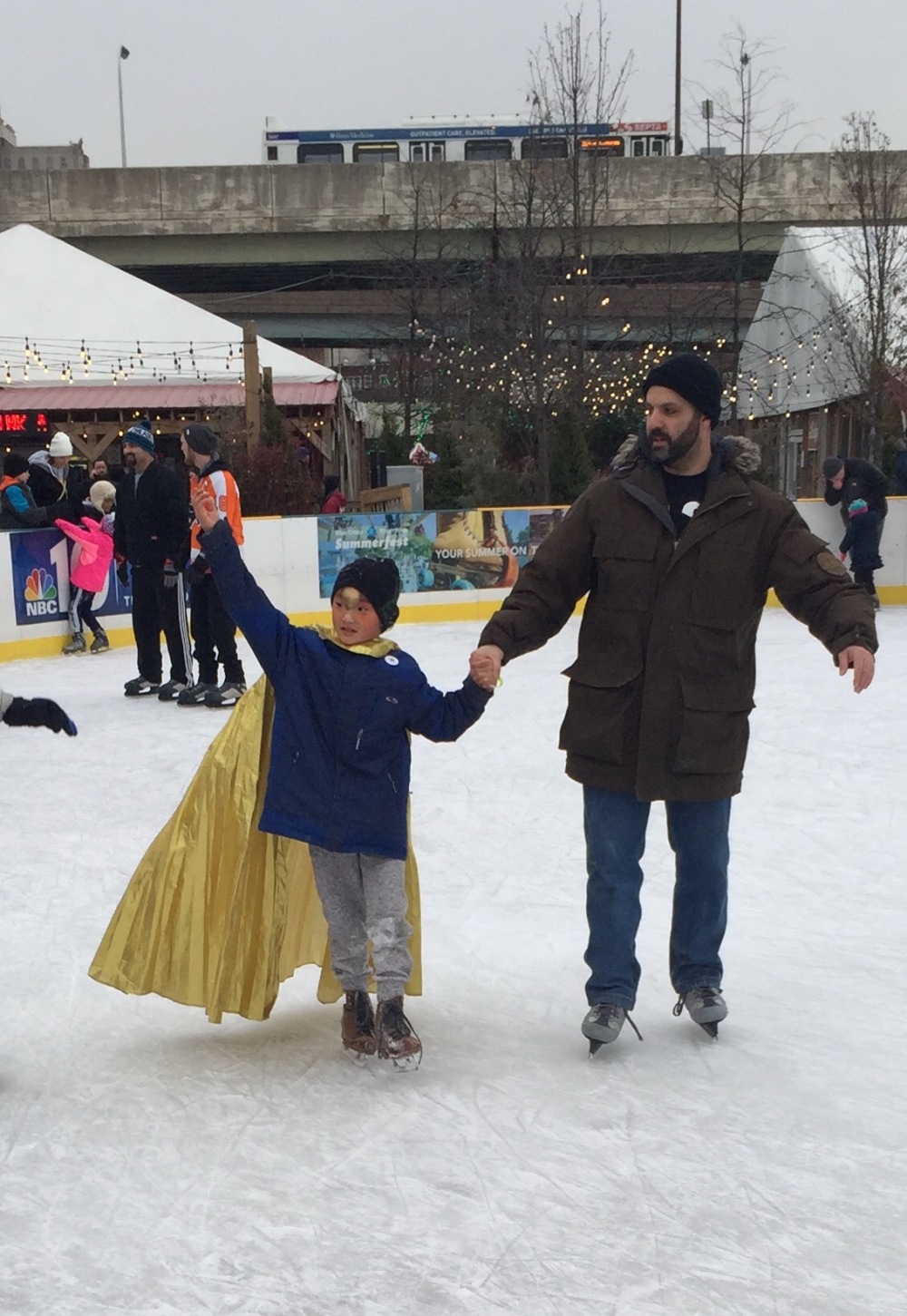 When we got home we found that we were “best dressed” (at least for that early part of the day!) on the Philly Loves Bowie Facebook page! My guess is it got even more exciting as the sun went down… but boy do we need an evening in!