I had wondered about this from the beginning. I knew Claudia’s birthday would be first-up after we started homeschooling. (Béla’s had been during the first week of school; in fact, Béla started kindergarten ON his sixth birthday.) And I worried: it was still going to be just a weekday, when Ben was working and Tucker had school most of the day. Would it seem lonely or wrong? 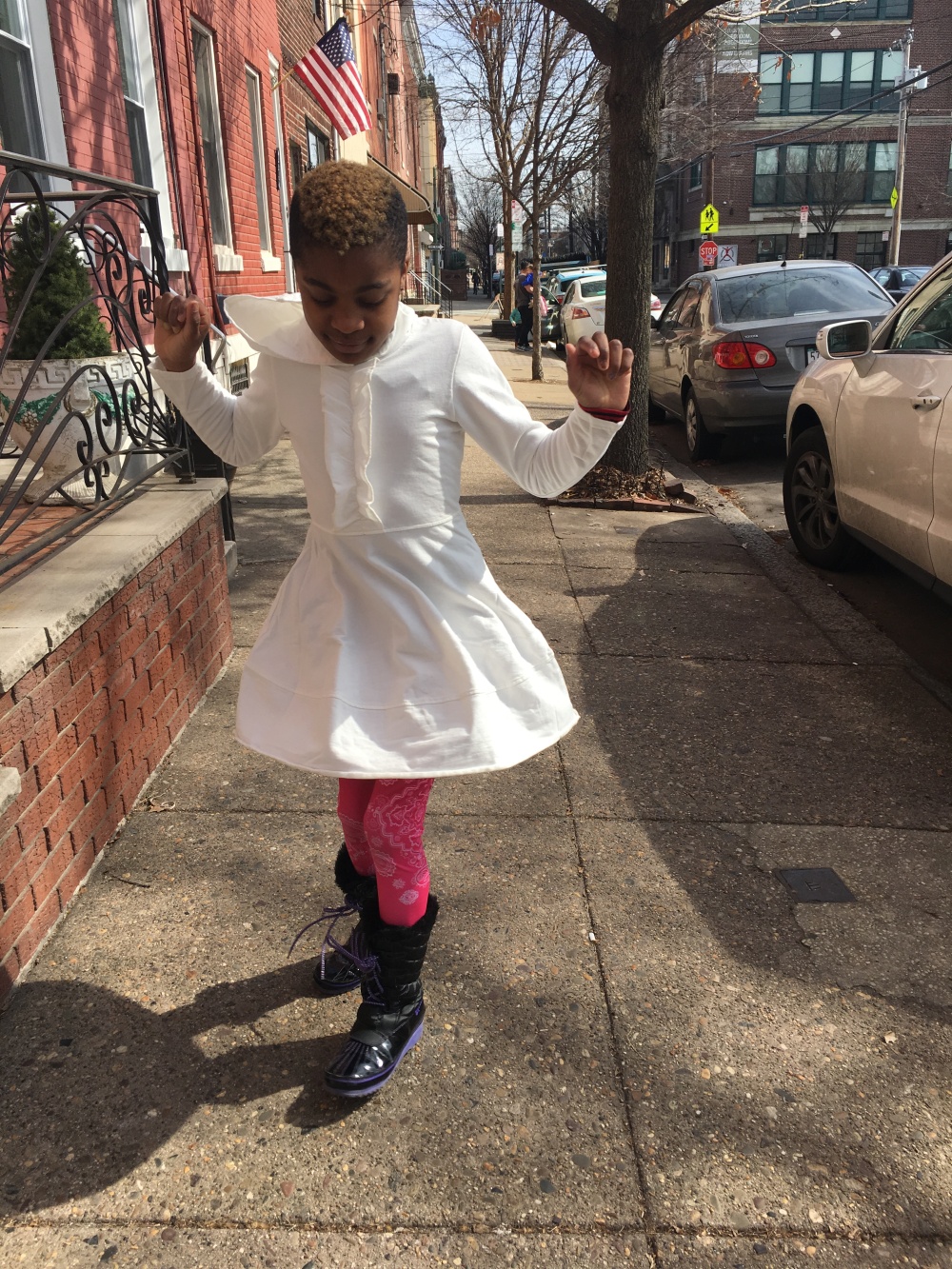 And then of course, I remembered that having a “birthday” at “school” often just meant having cupcakes from Acme handed out to your classmates, having them sing and wolf them down, and that was it.

Being home with family in and out, enjoying her gifts, and getting ingredients to make Big Mama Thornton-themed cupcakes for tomorrow’s SoR rehearsal, was plenty. We got a little schoolwork done. The kids took their walkie-talkie and not only walked around the block together without me, but went to the playground unattended for about half an hour or forty-five minutes — then buzzed me when they were ready to walk home. And then, Claudia had Girl Scouts, where she earned both her First Aid badge and a troop-sized cake.

(And the next night, she had Blues rehearsal at School of Rock, and decorated two dozen Big Mama Thornton cupcakes. Perfect.)

For the FIVE birthdays prior to this one though — (five!) — we had always been in Claudia’s classroom on her birthday, doing a pre-Christian Bulgarian craft with her class. The making of martenitsi, and giving them out on March 1st, was something we did at home, and so it had become an annual volunteer craft for Ben and me, since the time to do it usually fell on Claudia’s birthday, when we had to be stopping by with birthday cupcakes anyway.

While there are a million ways to make martenitsi, more than I will ever get to even if I change it up every year, for the years we did it in classrooms we were keeping it super simple, super short (something that could be done in an hour), not a lot of dexterity necessary, something we were sure everyone could manage. And we would send home an information sheet about the tradition with each kid. 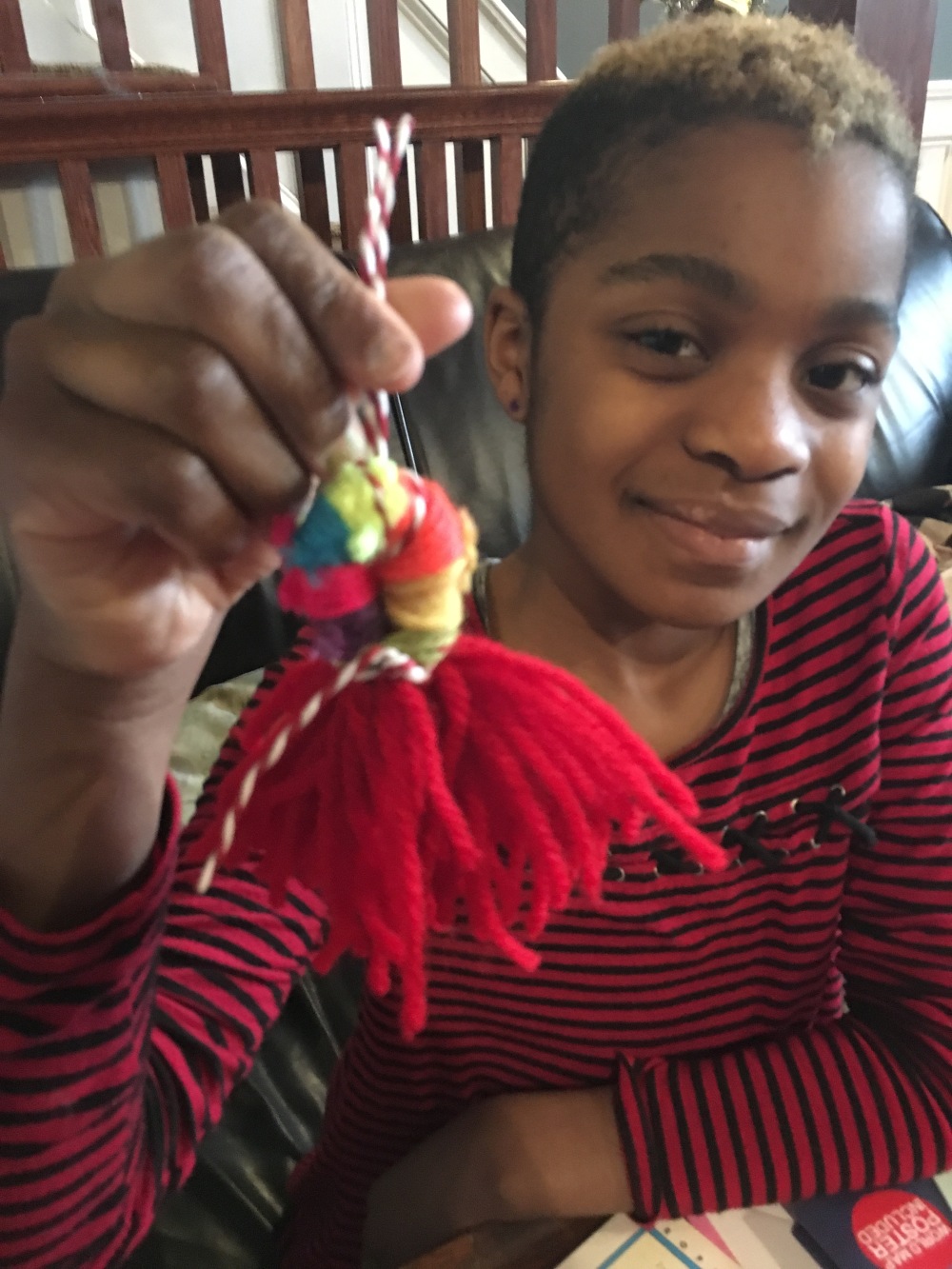 This year, I knew we would not have the classroom full of loud and sugared-up kids with googly eyes stuck to their fingers… but I also knew that I could look at new, more time-intensive martenitsa patterns. I knew that Claude had always been proud to have Ben and me come in and do this with her class, but I also felt like, doing it at home, the kids would actually get a chance to make theirs thoughtfully (Claudia always just sort of did hers in a daze of cake and noise, and gave it to Béla at the end of the day, along with the cupcake she had saved for him.)

(Neither of them is in agony in the above picture; they are both singing Jethro Tull’s “Locomotive Breath”.)

This year we got to try a new martenitsa design and they were far more independent and showed more dexterity than I had imagined! (I had been prototyping designs to choose from in the hotel in D.C. over the weekend.)

Hopefully, having had two cakes this evening, she and Béla are both in bed now, Claude with her Siouxsie bat. And I think one of my kids might have even had enough time and space to make ME a martenitsa this year — I was able to make one for everyone in our family!