A few years ago I took Béla over to Drexel University’s engineering school, where students were trying to set the World Record for the largest Rube Goldberg contraption ever. It was fun to see, but it wasn’t really a nail-biter, as the contraption failed in more places than it worked, and needed a lot of nudging, pretty much from the get-go.

Later on in that year the whole family went to what is now known as the Philly Contraption Contest. This was an even better event, because there were more contraptions, and they were made by younger kids, and some of them worked. And there was a craft table, and, I believe, pizza. It was a good time.

I was glad to see that the Contraption Contest was open to homeschoolers whenthe information about it popped up this year. I signed us up. I knew our kids would be at the younger end of it, and I knew our it would be hard to find someone their age who could commit to the project (the minimum size for a “team” was three), but those were the only two — to me, at the time — visible bulwarks.

Claudia and Béla decided that our contraption would be Baba Yaga-themed. A lot of things are this year. 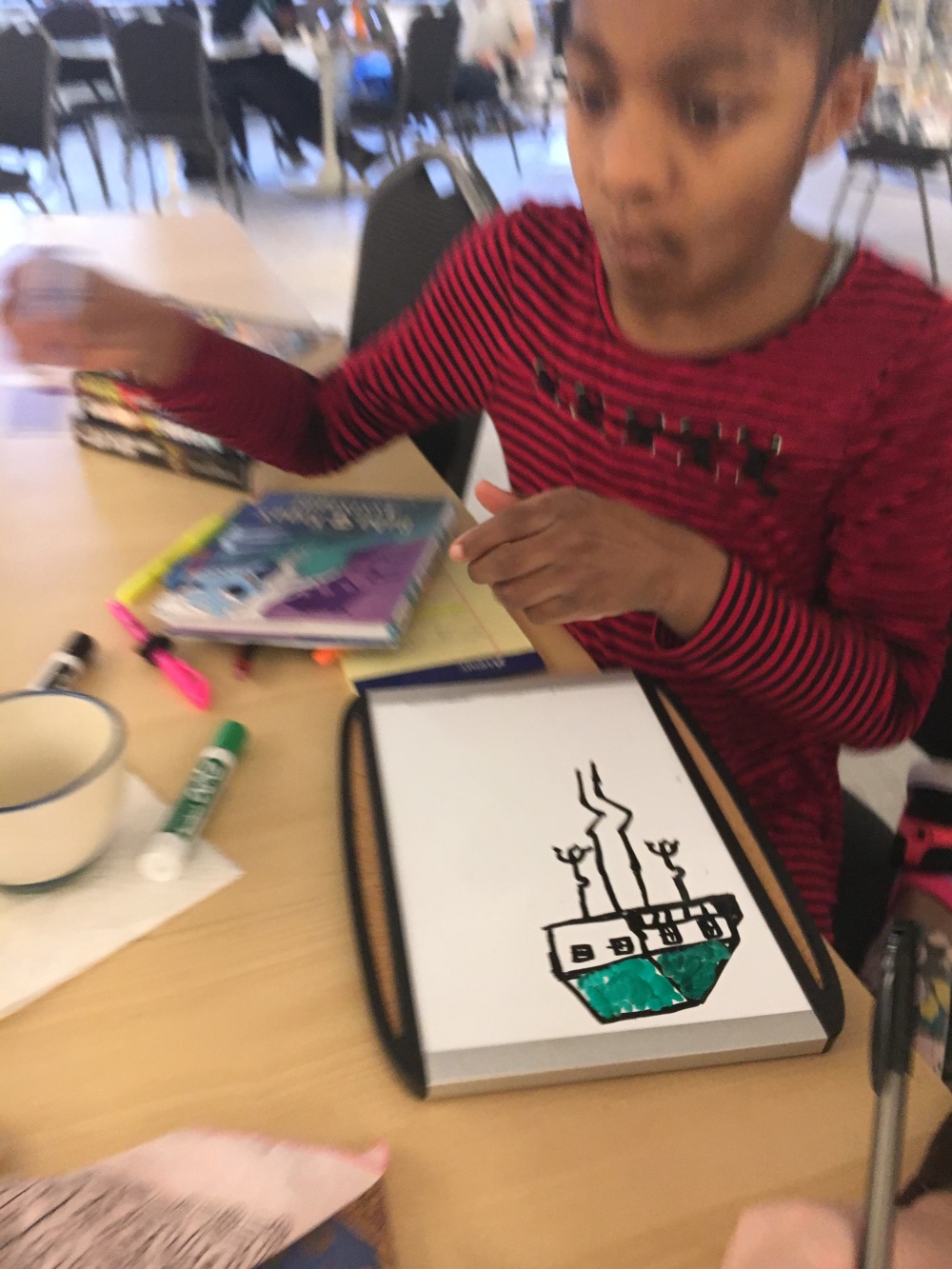 There were two major components to the actual competition: the mechanics of the contraption, and a creative narrative/storytelling component. I knew what part I was going helpful for — the narrative, the visuals, the “crafty” parts. As for the ten dynamic components needed to fulfill the competition requirements, I figured Tucker would be a big help (and indeed, he is.)

While we tried a few brainstorming sessions with a somewhat older cyber-schooled kid, scheduling and transport of our kids was difficult for Ben, and Claudia and Béla were confused and frustrated at having to hold back on developing new ideas, as they felt they had  to “wait” till the one hour of the week that they met with their proposed partner, yet were having inspirations and discussions about the project at home, together… because they live together.

Knowing that working just as a pair might make them ineligible for the contest, they decided it was the best way to continue. They were just sort of “playing the home game.” To fulfill the rules of the action Contraption Contest in Philly, the contraption had to water a plant, and we continued to go with that as our predicted end result as well.

To me, “a Rube Goldberg machine” is my old Mouse Trap board game. That shaky cage coming down the pole is all my memory had retained of it, but Wikipedia re-lit some synapses: In a proper operation, the player turns the crank, which rotates a vertical gear, connected to a horizontal gear. As that gear turns, it pushes an elastic-loaded lever until it snaps back in place, hitting a swinging boot. This causes the boot to kick over a bucket, sending a marble down a zig-zagging incline (the “rickety stairs”) which feeds into a chute. This leads the marble to hit a vertical pole, at the top of which is an open hand, palm-up, which is supporting a larger ball (changed later on to a marble just like the starter one). The movement of the pole knocks the ball free to fall through a hole in its platform into a bathtub, and then through a hole in the tub onto one end of a seesaw. This launches a diver on the other end into a tub which is on the same base as the barbed pole supporting the mouse cage. The movement of the tub shakes the cage free from the top of the pole and allows it to fall.

I could feel every bit of that happening. Just reading the description brought back the boot, the “rickety stairs” piece (all one molded unit), the bathtub and diver.

Everything made of the same material.

That had me really stumped. Were there kids out there who knew instinctively how to make machines like this out of household objects — out of all different materials, and weights, and things meant to have other uses? We didn’t have much around our house that even looked like the components of a contraption, other than dominoes.

We bought a pump-mister, having decided that our “plant” would be moss (under, and on the gate, of Baba Yaga’s hut), and we bought a mortar and pestle for Baba Yaga to ride in, and Claudia began needlefelting Baba Yaga herself. Cool, but none of these things had any dynamic motion, nor did we know how to get them any.

We watched many videos of Rube Goldberg-type machines and contraptions, and while the kids were able to imagine all kinds of things going perfectly, in real life, none of them were viable, and they weren’t getting a sense for what was. Their “sketches” of their machines were even less conforming to reality.

(This looks like Béla’s work. I think the notation “Something does it so…” is pretty representative of their whole thinking process this early in the project.)

They needed something to actually touch and use.

Well. I don’t know how Rube learned to do it, but it seemed to me that flat pieces of wood, and balls, even if purchased together in the same box, were necessary tools for learning. And boom — I had cause-and-effect, trial and error, and busy, happy, learning kids. (Yes, these two balls and pile of pieces of wood are sold as a “kit”. I think it’s quite worth it.)

This is just one of the videos made that day, but Béla had used the word “effectively” in every one of them.

So. We had this, which was something, and we continued ahead with design elements (purchasing hollow plastic skulls which Béla could make the LED battery pack and switch for — this image based on the story of Vassilisa the Beautiful, which also involves Baba Yaga.)

But we still only knew how to make balls roll down things and knock things down.

Wasn’t there some solid science to this?

The Six Simple Machines of Physics. 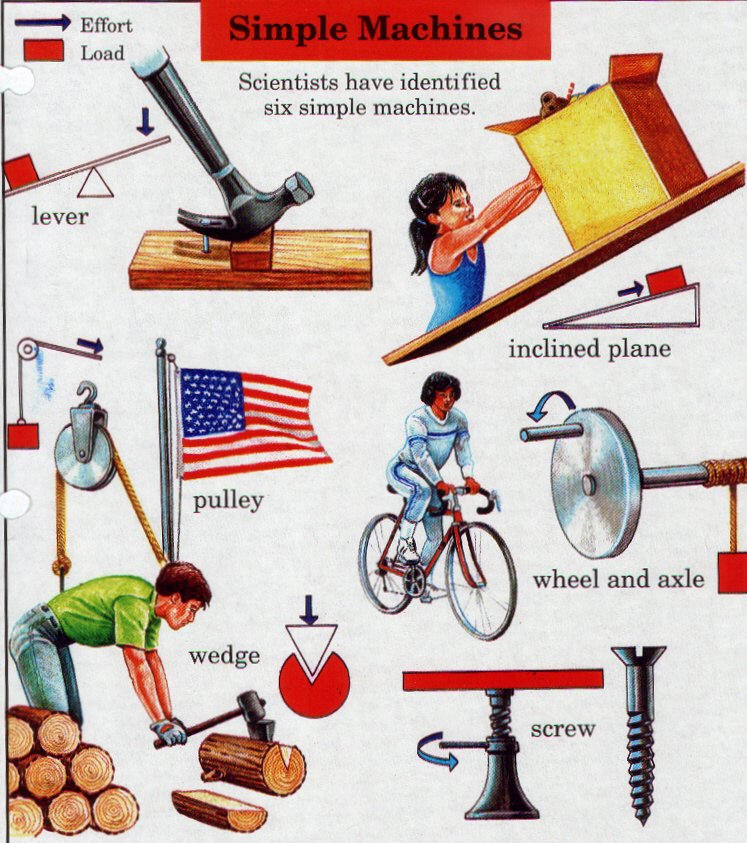 Learning about these meant buying another “kit”. But, for twelve dollars, we got a heck of a lot of knowledge. In short order, Béla had constructed a variety of levers, and a compound pulley.

Pre-fab? Or the best way to learn? Both — but, most importantly, the second. I cannot imagine having to try to make a compound pulley out of household objects, none of which were manufactured for the purpose of being part of a pulley. And what good would that have done the kids without seeing an actual, intentional pulley first?

So behold this photo, of my incredibly in-flow kids, neurons firing, ideas coming faster than they can get them out of their mouths. They are prototyping their contraption, their materials may no longer be considered suitable (I love this photo particularly because there are LITERALLY boxes labelled CONTRAPTIONS and PHYSICS in it — it’s practically a Warner Bros. cartoon)… but they. Are. Learning. 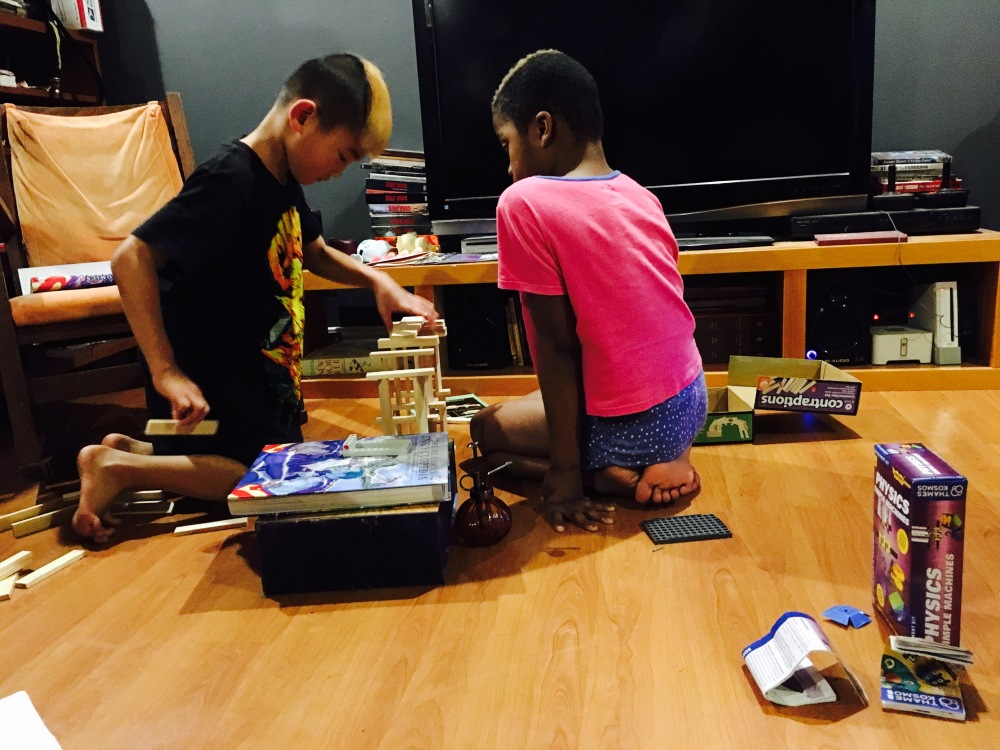 Building a Rube Goldberg machine was no longer a boundless project, where there was no link between their fantasies of what that machine might be and the reality of what they understood to be possible in the physical world. Now, they were (with Tucker’s teaching), measuring (in Newtons) the effort needed to lift a thing on one’s own versus using a wedge to lift it.

The kids and I began a six-part series in how to work with LEDs on instructables.com. Much of it was things they had worked with before — soldering, battery cases — but we got them a breadboard, and a few other helpful little things so that we could light up our skull like Vassilisa.

At one point, the kids were working on their contraption and Béla was describing some rather convoluted action that would take place, and included the phrase “and… something makes it go,” and I said “You know, that’s THE most dangerous phrase in contraption building, I think.”

He liked that, and it stuck with him. If you are building a contraption, and part of your master plan is “something makes it go”, believe it — you are going to be backtracking to that step sometime soon.

Today, we concentrated one one “simple machine” alone — the screw. A friend had shown me a set of plastic screws, and tools for puncturing and securing, meant for making movable cardboard toys and structures. The kids had gotten the set for Hanukkah but did not get to try it until today. In an attempt to get time enough for a second cup of coffee, I handed them the plastic screws and some broken boxes. Three hours went by before they even thought about another activity (eating).

They asked to listen to the Talking Heads.

At some point, Claudia came running at me, quoting from Vassilisa the Beautiful about a knight “dressed all in white” — they had found a way to incorporate David Byrne and his Big Suit into the project. Béla concentrated on Sir David while Claudia made Vassilisa. 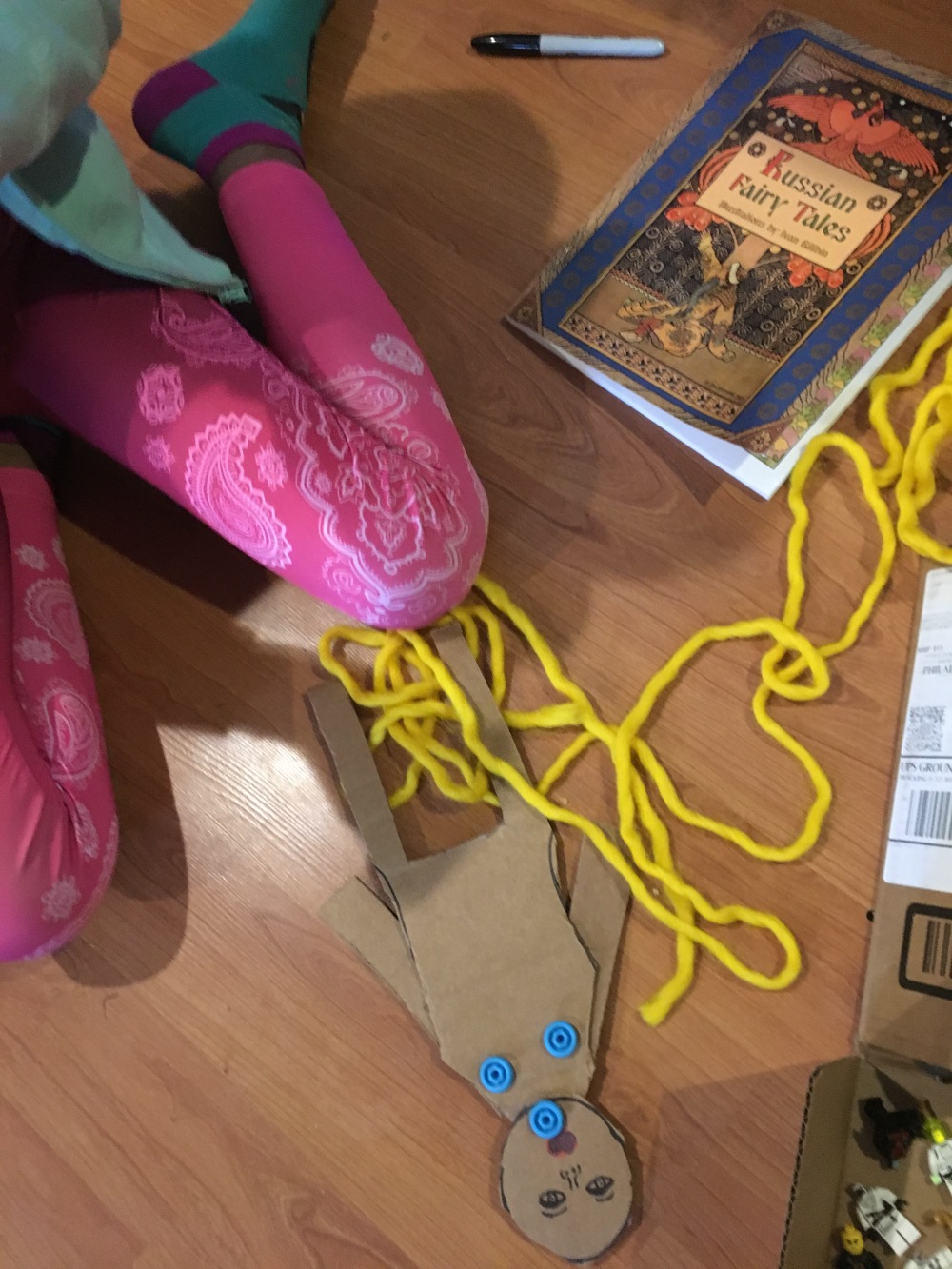 Béla was definitely surprised that a good portion of the “schooling” day was being allowed free reign to use a hammer that had a knife for a handle. I think Ben had gotten them these multi-tools while on a business trip.

In my personal opinion, our process and materials have strayed far from “competition” standards and I am perfectly happy with that. Attending the competition in the past has been fun and we are spending so much time and energy on this project, the kids have said (and demonstrated) that they are happy doing it for its own sake. Also, our schedule has been thrown way out of whack this month because I was asked to speak at a conference at Oxford University, and we have to go to England! Our resources of time, energy and motivation for basic housekeeping are at a premium, but right now, the Baba Yaga Contraption is “school” and we are in a serious groove. (Really, you should have heard the three of us on “Take Me To The River”.)

We are grateful to the Philly Contraption Contest and how it has inspired us. Today was the day I realized I had no way of fitting all that this was giving us into just one post… so expect at least two more! Our mortar runneth over, with Baba Yaga displacing whatever else was in there. Watch this space!