The first time Claude and Béla (or any of us) saw Asperger’s Are Us live was two years ago at Drexel University. Tuck and I had gotten a lot of support from the A.J. Drexel Autism Institute and they had made it possible to fund the show, in a great space, free to attend, with a Q and A and pizza afterwards. It was one of the many events where Claude and Béla were The Only Kids There, and some of it was a little above their heads but overall they thought it was hilarious.

We found a great local artist and teacher, Jeffro Kilpatrick, to do what I now feel could be a serious collector’s item of a poster for that gig — considering how critically acclaimed AAU’s comedy tours have been and how successful the documentary Asperger’s Are Us: A True Story was at South by Southwest, and with everyone we knew who’d seen it. 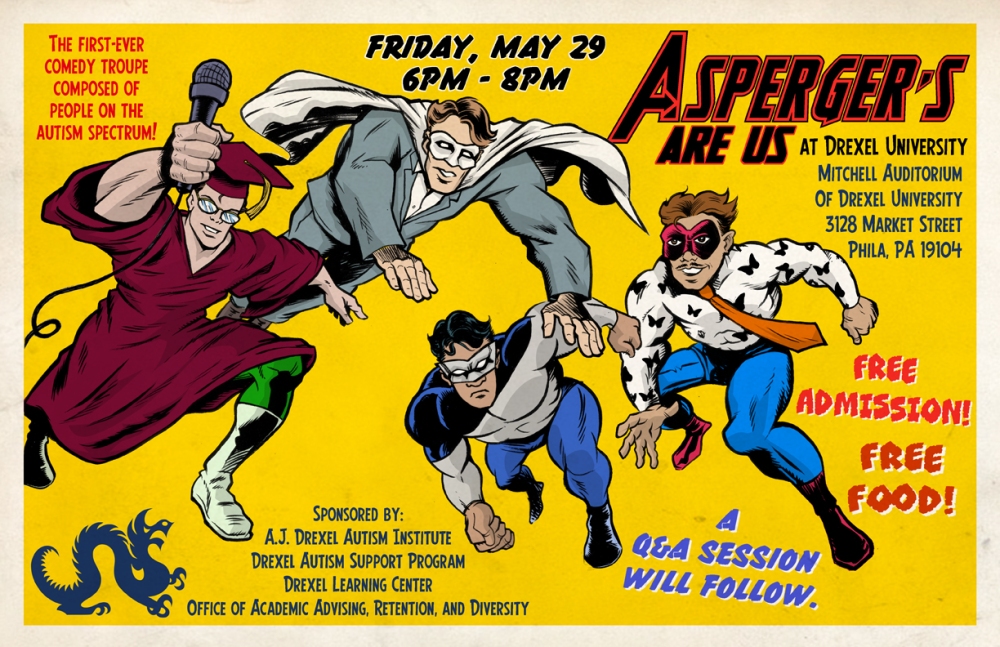 Last night we had tickets to AAU live in Philly, which for most of us would be our third time seeing them (we saw them this past summer at the Fillmore), but Tucker and I begged off at the last minute. Ben took the kids. We received photos and quotes throughout the whole show and the kids came home totally amped.

A bit of Béla’s entry is redacted, because while we did notice similarities in how New Michael and Tucker expressed anger, Béla was a little factually off in what he wrote, so we skipped it. Claude and Béla have lived half their lives now with a family member with Asperger’s. When we talked about whether anyone in AAU reminded them of Tucker, what was very clear was that they didn’t see the guys in Asperger’s Are Us as being very similar to each other, but both had demonstrable examples of where they felt that Tucker and New Michael had some commonalities. (In scenes where I myself noticed familiar body language, both kids sat up in their sleeping bags.)

Having seen the “adoption” skit three times now, I was relieved that they understood that it was not mean-spirited, as is nothing about Asperger’s Are Us, and it’s easy to see why they understand that. (In case Béla’s printing is not clear, he has written: They did an Adoption skit where they pretended to have a son and get a new one and they pretended to have a truck full of kids. The way they did the skit was not real. Kids do not come from a truck. Asperger’s Are Us says funny stuff of all people. I just thought it was funny.)

In watching Asperger’s Are Us: A True Story, the first moments of the movie had the biggest surprise in them — Claudia had not understood why Noah had thanked her for “the drawing” at the show the night before. Claudia’s drawing of Asperger’s Are Us (from 2015) is in the opening credits! She wishes all to know that her drawing skills have improved a great deal. 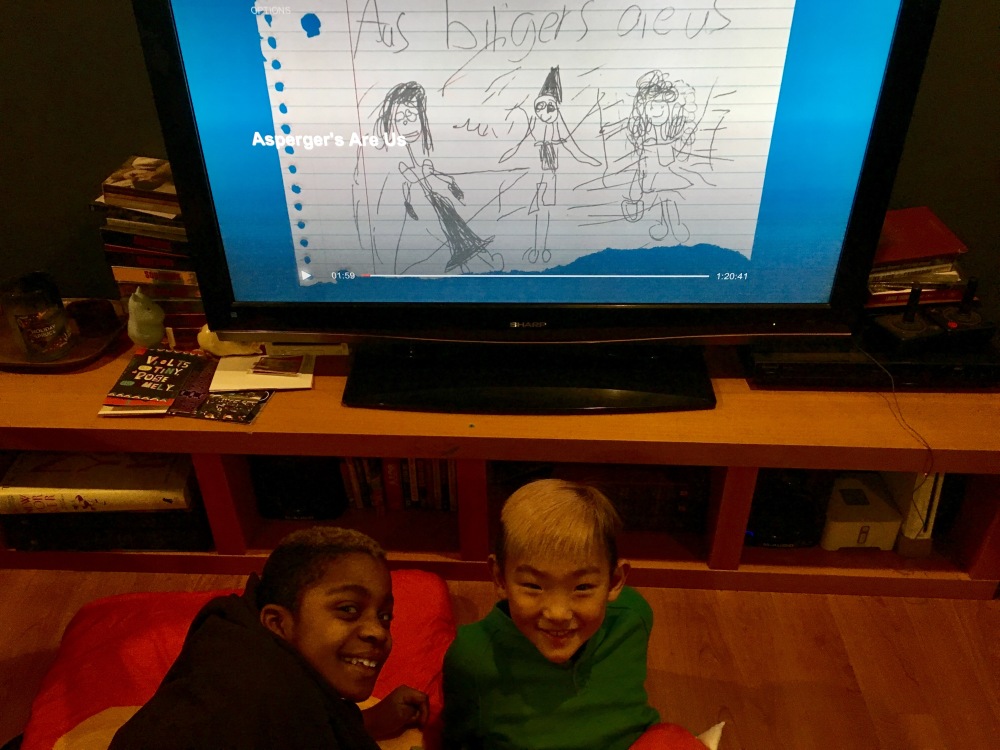 We are happy for their success and honestly we never get tired of the “President marrying a train” sketch.