Shortly after Christmas I saw a call for abstracts for a conference called Winter Festivals and Traditions, to be held at Oxford University. They were very short abstracts and so — since it’s harder for me NOT to talk about neurodiversity and processional arts than it is for me to talk about it — I wrote one, figuring that if it got accepted, then I’d have a new problem to deal with.

I got my new “problem” in pretty short order. We were frantic, but excited.

I thought about dividing this post into many different posts but since it happened all simultaneously, we can post it that way. We will just have to divide things into categories!

Oxford has COOL SHOPPING and we got stuff we could NOT have gotten in the US. Books from a series called “Beasts of Olympus” (you can get them in the US, but with not-as-good covers) which they both got into heavily right away, and, well… this.

So we had to get up kinda earlier than we are used to to get to the conference.

We gathered with other presenters as we looked for the right building, and a burly older man (who was Latvian, we learned) looked at Claudia’s coat and said “Is that a martenitsa?”

(Claude in fact hung her martenitsa on a tree later that day, in Oxford. She asked Tuck, “Is this bud poisonous?” “Yes,” he answered. “Dag!” she said.)

The kids and Ben did some sketching, walking, and street-fair-eating during the early part of the conference. Then they came back for my presentation.

It seems I looked more or less like this: 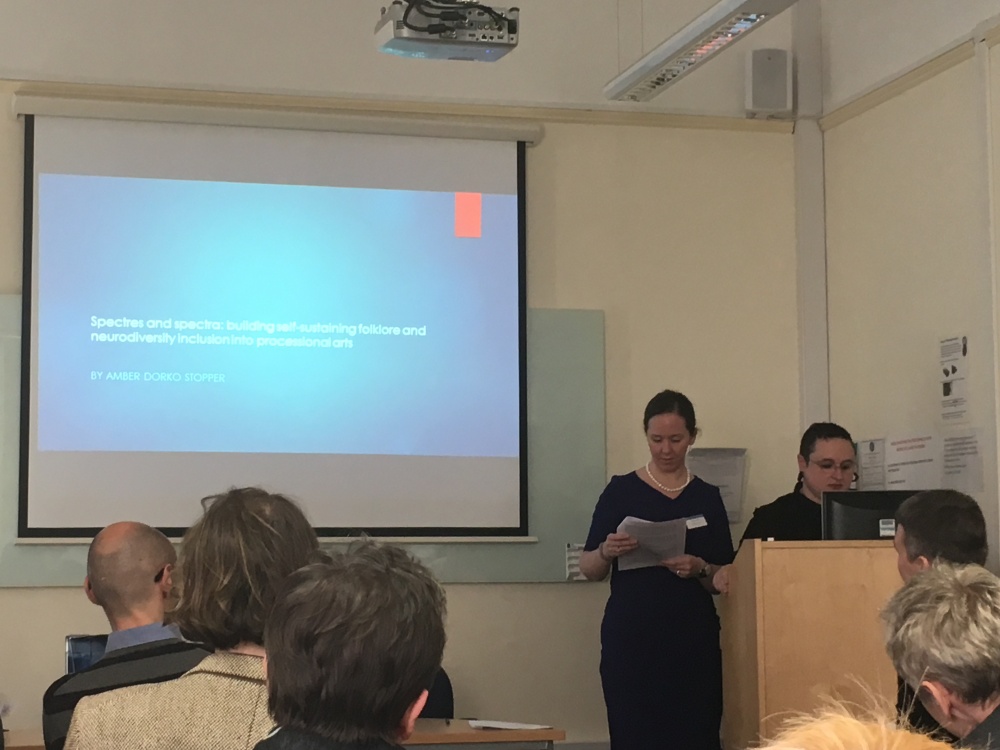 But Claudia’s rendering of me was more like this. (I did end up sitting down while Tucker worked the PowerPoint.)

We left before the conference ended because we were tired and the kids were at the end of what they could handle. But we ate at the Eagle and Child (which was a known hangout of Tolkien, and C.S. Lewis, I believe?) And had our first sticky toffee pudding.

Both Oxford and London had features that they both loved. Claudia melded both cities into one image:

And Béla did some interesting drawing of leaded windows that I really like. 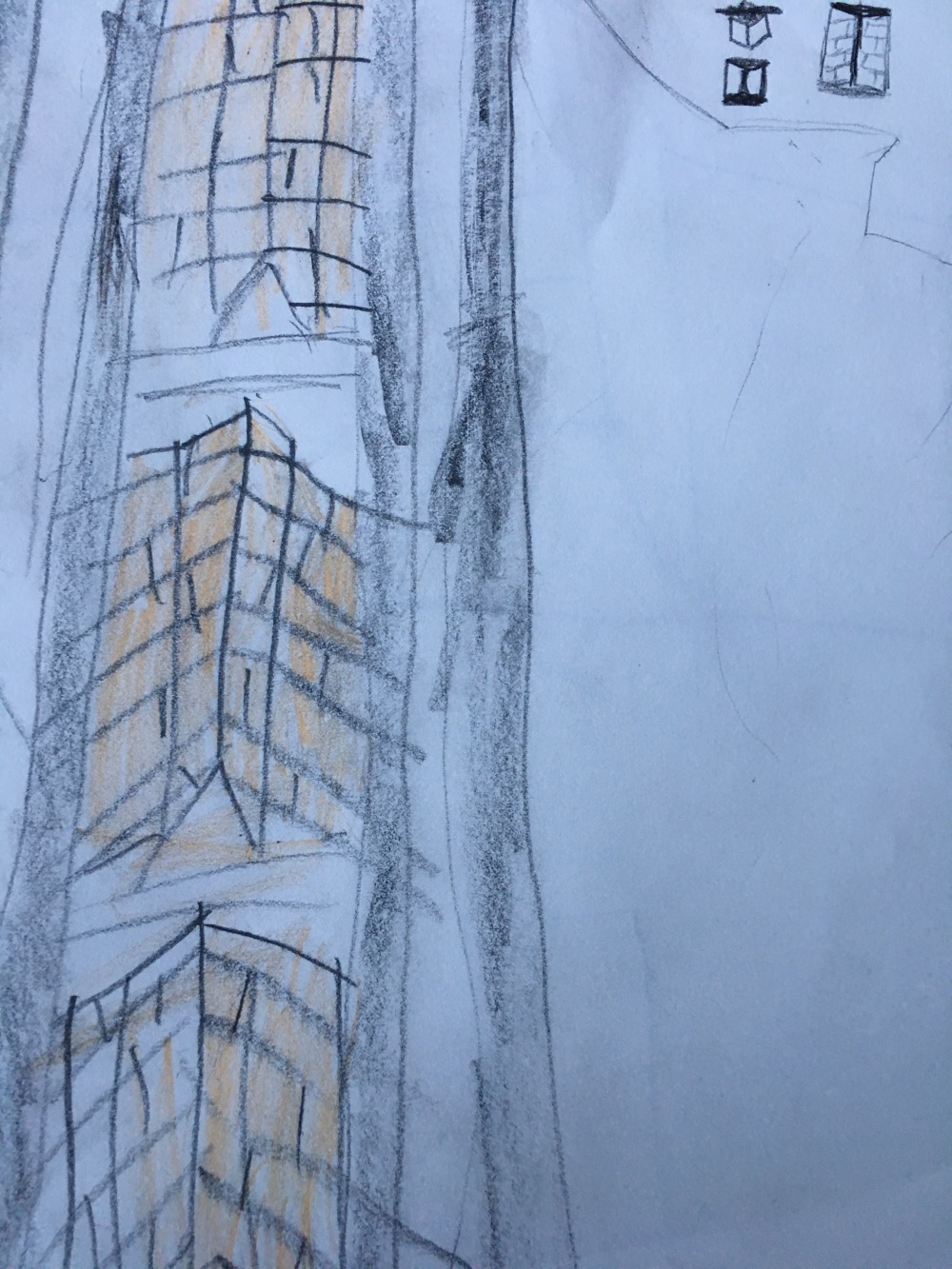 MOSS! ENGLAND IS BETTER AT THIS THAN WE ARE!

So: spoiler: we killed all our moss that we tried to grow on the burlap (“hessian” as they say in the UK) affixed with Moss-Tac. Maybe Moss-Tac is not such a good substance. But moss, in England, will grow on anything. As long as it is a rock. 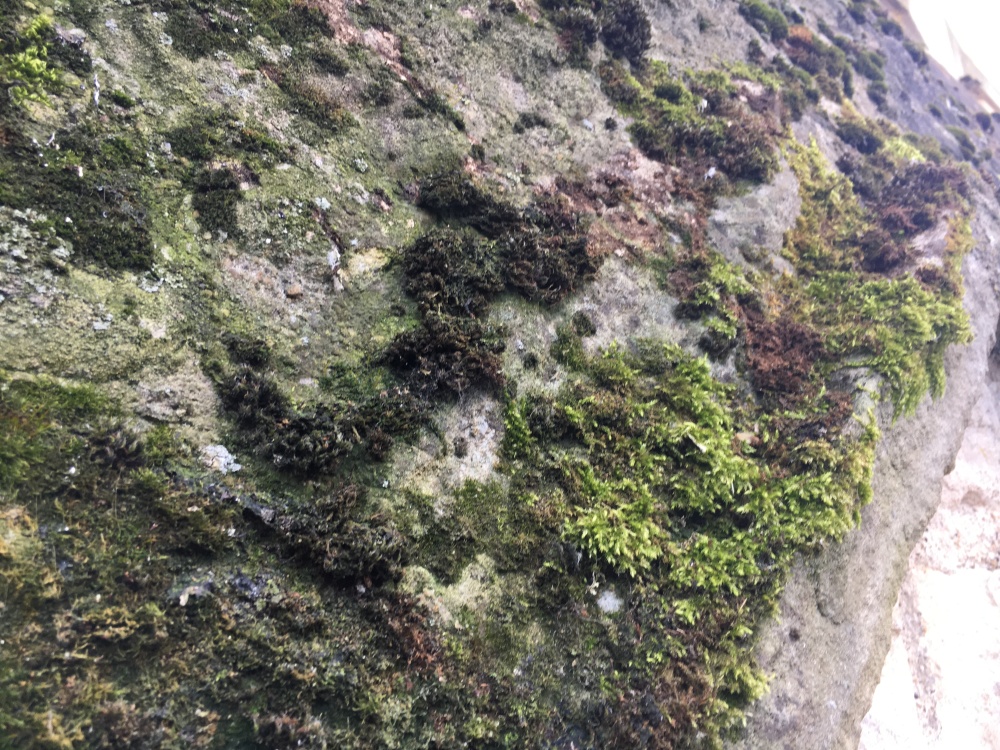 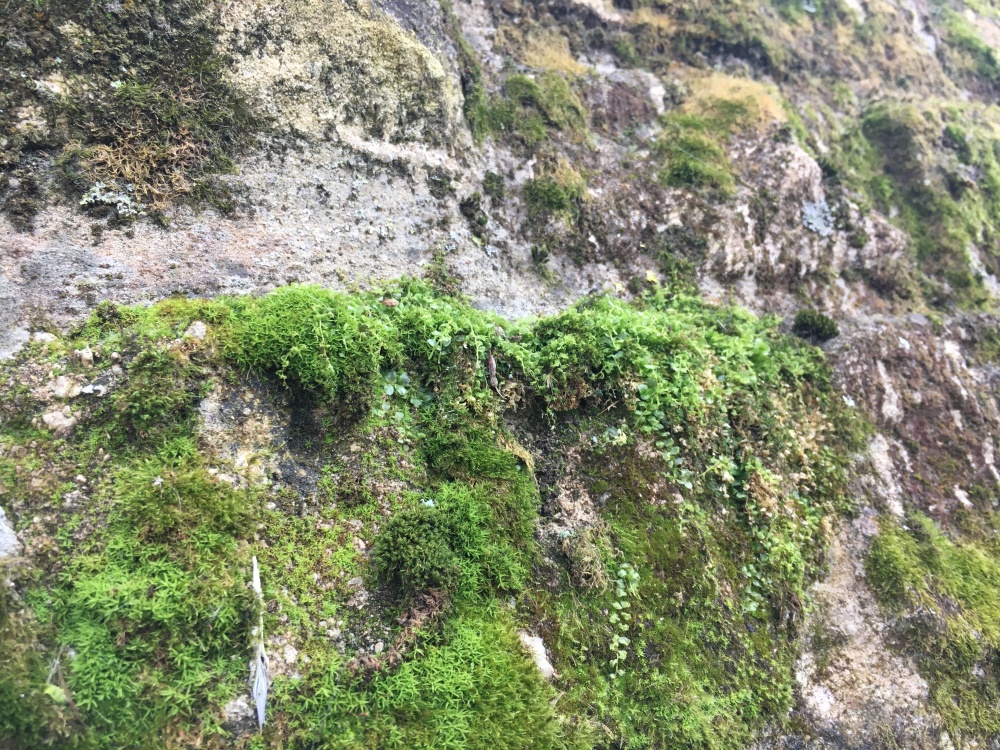 THE PITT-RIVERS MUSEUM IN OXFORD IS AMAZING

Need more bones? They have more.

And for a girl who was LITERALLY just assigned a research paper on how crystals are formed? Pitt-Rivers seems to have done a lot of the work for her. 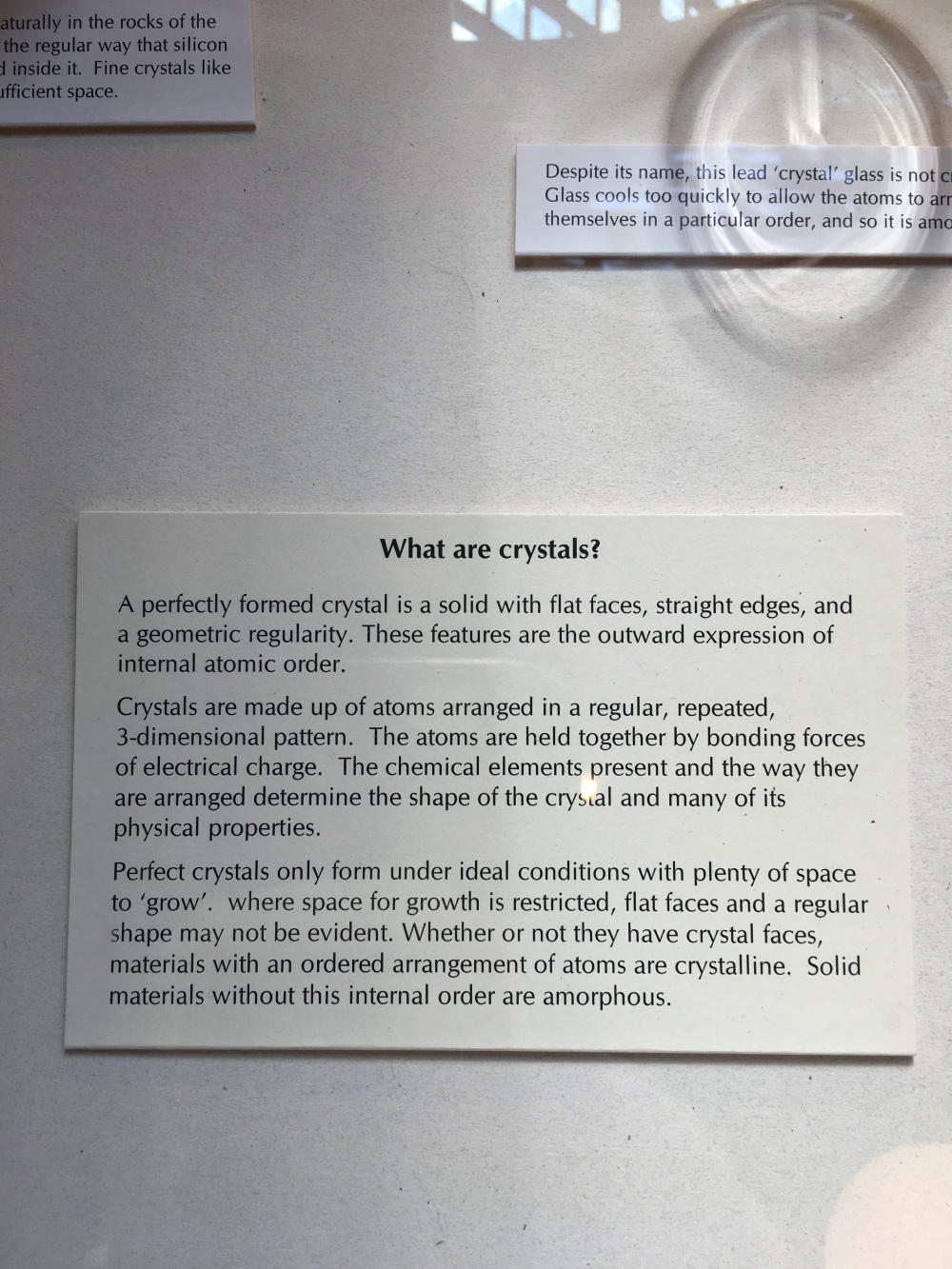 Claude chose some pyrite and a lurid dyed geode from the gift shop, but three of us got orange calcite. I don’t know what it is about that stuff, but it’s got a certain magic. 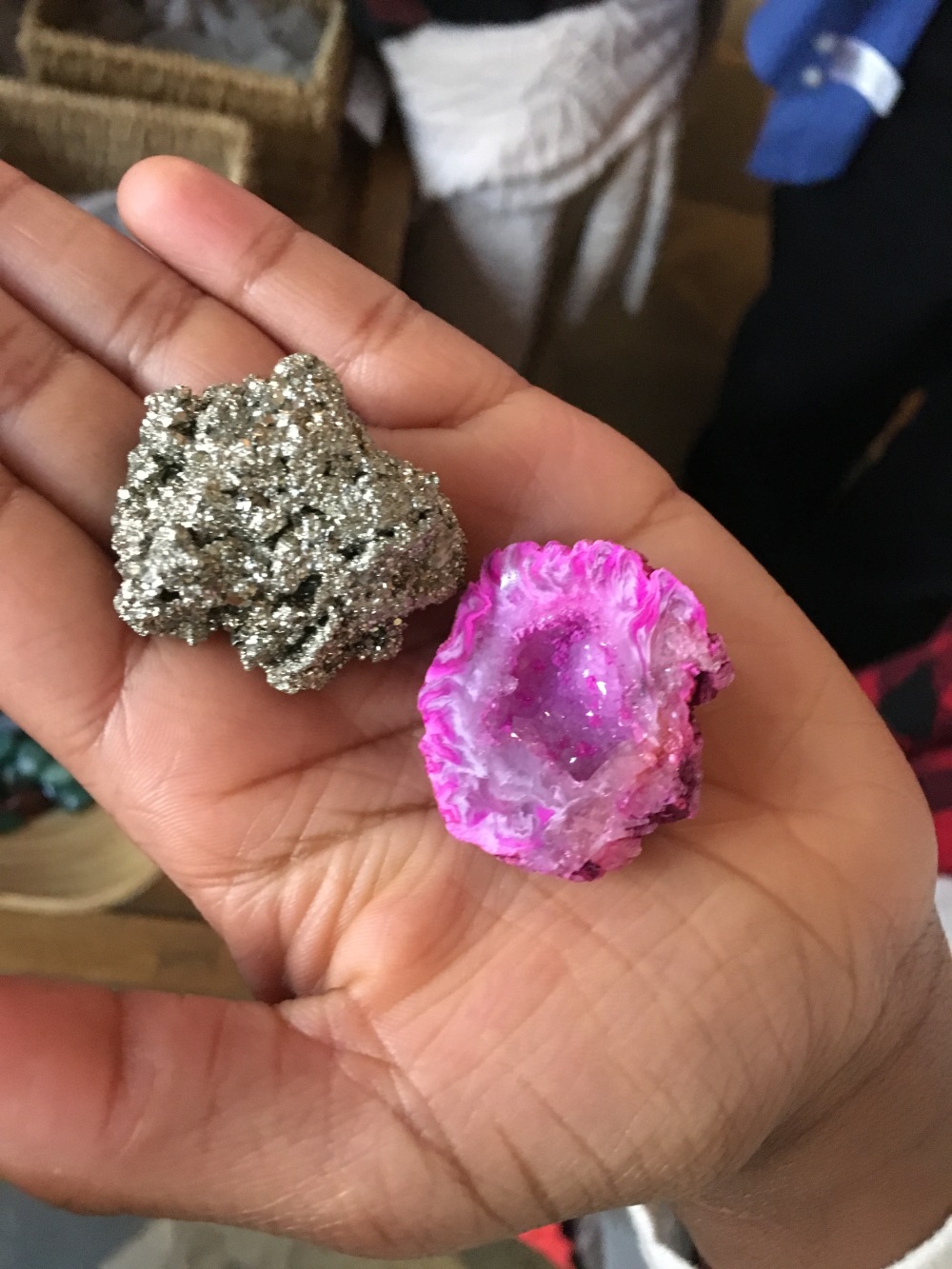 Like, too crazy. There were a few things we did not get to do, as things in London (which is about five New Yorks) sell out fast. There was a Moomin gallery exhibition — sold out. We tried to get to the London Eye — sold out. But we were only in London one night, to be as close as possible to to the airport, and the best parts of the trip for all of us, I think, were in Oxford.

By the time we were in London, there was no food in the entire country anymore that was appealing to us. Nothing.

We took a bus tour. That was fun.

(She was genuinely delighted by the Tower of London.)

It is interesting to me that every single person in the family, including the children, knew there had been a terrorist attack in the city we were flying to the day before we flew to it. Funny, no on mentioned it to me at all! It’s almost as though they were hoping I wouldn’t find out! Well, there were a LOT of flowers. A lot of flowers. And the kids did know why.

The next morning we went to Trafalgar Square, right near our hotel…

and looked for a post office so the kids could post all of their postcards… and buy the DAVID BOWIE STAMPS! (We also got a really cool set of stamps that is sort of comic-book-style renderings of the Great London Fire. Neither kid has shown a philatelic interest but they were all too cool to pass up.)

We were happy to get to the airport. We were ready to get home. Béla found a LEGO set of London landmarks, and we bought a few bags of “fun size” Cadbury Flake bars (my favorite… Tucker and I almost did the Bad Thing and bought a cracker-sized box of wine gums, but we didn’t.)

Both C and B are working on some drafts and redrafts of personal narratives of their trips. They will be available to read here soon.

We conclude with an Oxford pub dab. Can’t remember the name of this place; it might have been the Crown. But it was where a love of fish and chips — and confusion about why all peas must be mushed — was born. Even Claudia said to me tonight, it’s Oxford she wants to go back to.

(We will save some photos to go with their personal narratives.)