Last year our friends the Mundies began a tradition in our neighborhood, of summer Highland Games. We loved it and Tucker has been throwing cabers here and there all year (not actual cabers but things that might pass for one). Last Sunday, just like for the inaugural South Philly Highland Games, Ben made scotch eggs, everyone put on their kilts (actually Béla did not have his “family tartan” at this time last year — he got it for his birthday in September!) and we… crossed the street to the field!

Claudia had spent the previous day in the ER for seven hours (sigh… it has been that kind of summer) having an infected insect bite lanced.) As we got to the games I saw a blur running towards her… her friend Evalisse, from Claudia’s school days, had come to the games hoping to see her.

Claude’s injury did not hold her back from competing.

(In that last picture there, she was retrieving her chips from Tucker who had been holding them while she played Lazy Foot — that dad there is saying that he ate five of her chips while she was away. Look at her face.)

Béla was somewhat late to the games has he was… in the house, having an infected scrape debrided and cleaned. (What the hell, guys.) But he made it!

The games always end with Tug-o-War and while kids on kids is fine, adults on kids is… more enraging. Which means more fun! 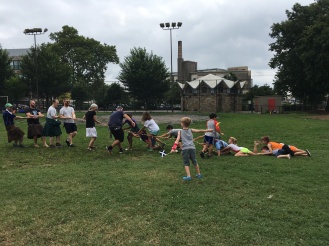 I have said to Jim, I hope we have a t-shirt design next year, this is becoming something we look forward to! We are grateful to be part of it. 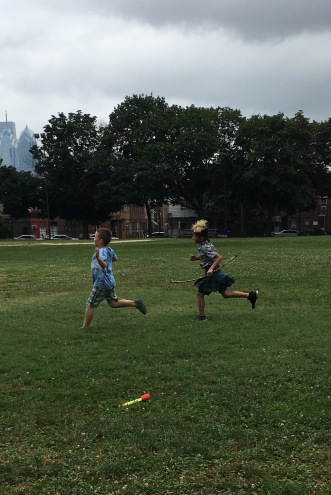 Across the moors of Columbus Square they go.