Could it only have been a month or so ago that I asked — and I thought I was asking hypothetically — “When are we gonna have a ska show?”

I asked this at School of Rock Philadelphia, and I had asked the regional manager. And later that week, an e-mail with a list of Fall show sign-ups appeared — and guess what was among them? Ska and Reggae.

So on our drive to Cradles to Crayons that Wednesday, we listened to some Madness. The kids have been in possession of my old ’45 of “One Step Beyond” for some time, and recognized it, but were even more responsive to the video later that day. In the evening, I put some broccoli on to steam, and found “Dance Craze” on the Roku.

The broccoli burned, so we ordered out for milkshakes.

Both kids were loving the music, but Claudia’s reaction to the first performance by the Selecter was particularly great. “Black people!” she exclaimed. And then: “GIRLS!”

The week went by, sometimes with ten repeats of “One Step Beyond” or “Night Boat to Cairo” at a time. When the kids played with GarageBand on their iPads, I realized that Claudia had figured out how to make something that was, essentially, a ska song. She’d already internalized it.

Then earlier this week, in what I honestly thought was a migraine-induced mirage, I got an e-mail saying that the Selecter were going to be playing at Boot and Saddle the next night.

Boot and Saddle is about three blocks from our house.

Some quick e-mails and phone calls to be sure the kids could go to the show, and there we were — with tickets to see THE SELECTER!

I mean — I’D have loved to see the Selector any time from 1984 on, honestly. But seeing them with my very excited, invested children? Excellent. 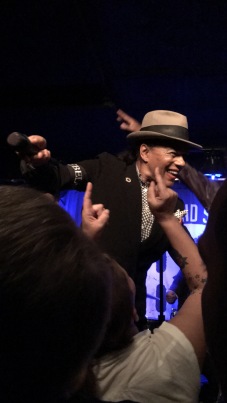 Both kids are signed up for the ska show and I’m sure we’ll be reporting on that as well. But it was wonderful to see the crowd so excited at the show… Claudia started fading RIGHT before “Too Much Pressure and “On My Radio” but was dancing her face off as soon as they started!

And then they got to meet Pauline Black.

They did have a top night.