As we do a few times a year, Tucker and I took some of Ben’s saved-up hotel points from business travel and took the train out of town. Tuck had an exam to study for and we have found (at least we are trying to support the theory) that studying in a quiet hotel room is more conducive than doing so at home, and then we get to eat out and walk around some too, kid-free.

Usually we go to D.C. or Manhattan to do this. This time we picked Baltimore, and I can’t say we will again. I’m sure we will go to AVAM again in the future and know the kids will enjoy a day at the Inner Harbor sometime. But for our purposes — nah.

Anyway, PART of the fun of going to Baltimore was in that on Sunday, Ben and the kids would board Amtrak in Philly — and Tuck and I would get on the SAME TRAIN in Baltimore — and we would ALL go to D.C. together! 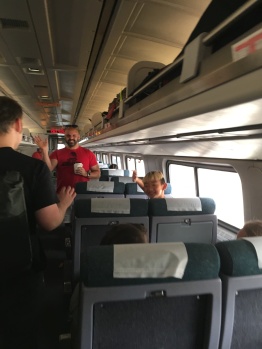 I have to admit, that part was fun.

While Tuck and I had been ordering super crappy takeout and wishing for things that did not have crab in them, Ben and the kids had assembled a NEW 3D printer. We had gotten one from a Kickstarter campaign in January, but as with all Kickstarter campaigns, there were no guarantees that would go well, and the company was out of business before they had finished fulfilling backers. The printers had some serious problems for which there were almost immediately no support and no source of replacement parts. A bummer. Hopefully this one will go better (so far, actually, so good, from the samples I found on the table this morning.) 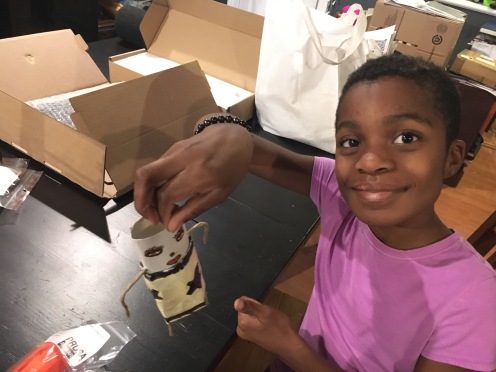 (Claude also made a little toilet paper roll automaton from her first issue of Kazoo magazine. Now the kids both know what “steampunk” is. Someone had to tell them.)

We had two destinations in D.C. The first was to go see Ai Weiwei’s exhibit of Lego portraits of political prisoners. 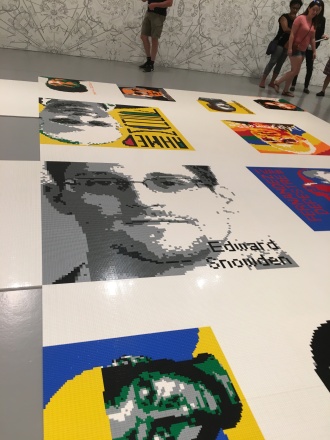 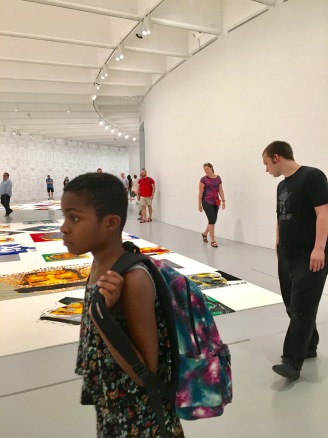 Here is a panoramic photo Béla took at the exhibit.

We had lunch at a restaurant that served pre-Columbian Mexican cuisine. All of it was good but Tucker got tongue tacos and grasshopper tacos! (Even more amazing, when I got home, a friend on Facebook was making grasshopper tacos with his own nephews!) 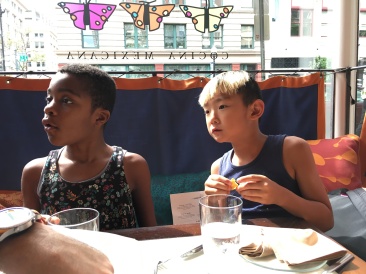 Our second destination was — now that the kids have finished their first zines — to Fantom Comics, which has a very wide zine selection. Claudia and Béla asked if they could put their own zines on the shelf (no price was negotiated, but the staff were very admiring of the zines). Just like that! Zines are kind of amazing that way. 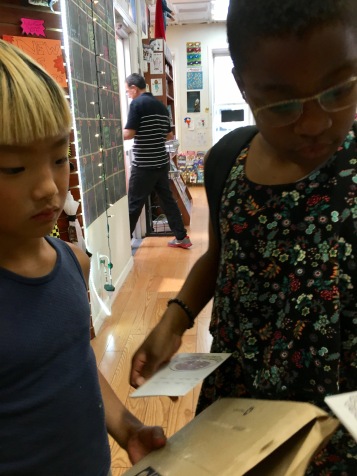 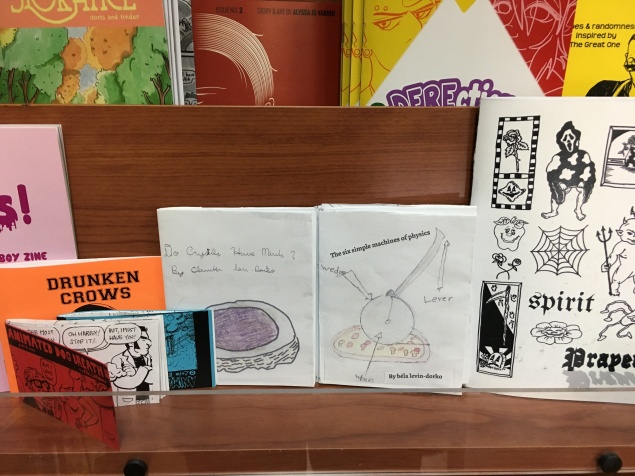 At Fantom, they got a few more of the “Olympians” series they have been enjoying (they finally had Artemis available). It was a very full day.

For kids who do not begin the “School Year” until a week from tomorrow, they have both logged over two hundred educational hours since July 1st. It’s going to be fun to tell them that.