This has been Claude and Béla’s most independent summer ever, and I’m not second guessing when I say it has had moments in it that I am sure they will remember for their entire lives. (Or, in Béla’s case, never remember, due to his concussion.) Yes, this summer of independence did land us with two emergency room visits, but also left us with memories of: an entire week in a fairy-tale cabin in the woods in Woodstock, New York, while taking a music day camp with Ike Willis of Frank Zappa’s Mothers of Invention… indoor skydiving… filming a TV commercial… doing a glamorous and messy photo shoot with an infamous drag queen… and more time out on their own, independently in the world, than ever before.

What began with them walking around the block (with us standing and watching for their heads, nervously) a year or so ago, evolved over the course of the homeschooling year into going to the playground without an adult, going to the corner store without an adult, mailing letters, dropping off and picking up dry-cleaning alone — and walking to friends’ homes to see if they were available to play (and, for Claudia, meeting a friend at the corner diner, to sit and snack and chat with their sketchbooks!)

But I had a dream, maybe one leftover from my own memories of doing it myself without adults for the first time as a kid — I wanted them to walk to the supermarket. This became a secret goal for me; that Béla and Claude walk with friends, to the Acme.

Not only is our Acme the furthest my kids would have walked alone so far, its path contains at least one non-regular street crossing. (It is also a historical site — the site of the former Moyamensing Prison, where serial killer H. H. Holmes was executed, and where Edgar Allen Poe was at least once incarcerated.) It’s also AN ACME. THAT YOU COULD CONCEIVABLY BE IN WITHOUT YOUR PARENTS. AND WITH MONEY.

While I had meant to suggest it at a specific goal over the next week or so, the kids and their friends showed up here this afternoon to let Tucker and I know that they were on their way and needed money. We decided they should take an iPad to document their trip, and so they could text if they needed to. I warned them that I expected that a store employee may give them a dirty look, or yell at them pre-emptively, or even tell them they couldn’t come in unattended. All four of them seemed surprised that I would think this. “It’s not like just one kid all alone,” I was told. “It’s four kids, together.”

They really believed this was in their favor, and I did not want to suggest any of the scenarios that could prove them wrong. I told Béla to walk forward at all times and that if he knocked over any displays of food… well, I didn’t know what I’d do.

And they were off.

They let us know when they got there. We could see the Halloween candy was out already. They let us know when they were leaving as well, and ran into a friend who took their photo in the parking lot. Claudia said that a security guard had said to them when they had entered, “‘Whoa whoa whoa, where are your parents?'” but that she had “supersaturated” (exaggerated) her representation of the degree to which they were accustomed to independent Acme travels. Apparently, they proved themselves worthy. They came home cheerful and loaded down with microwave mac and cheese, ramen, and canned soups, as well as some candy and juice.

Everybody needed the microwave or a stove burner at once. The sisters campaigned hard for getting B. and C. to watch The Sound of Music, but Claudia wasn’t having it. They watched some Futurama while they ate. I could see how proud, how changed, Claude in particular felt by this adventure. 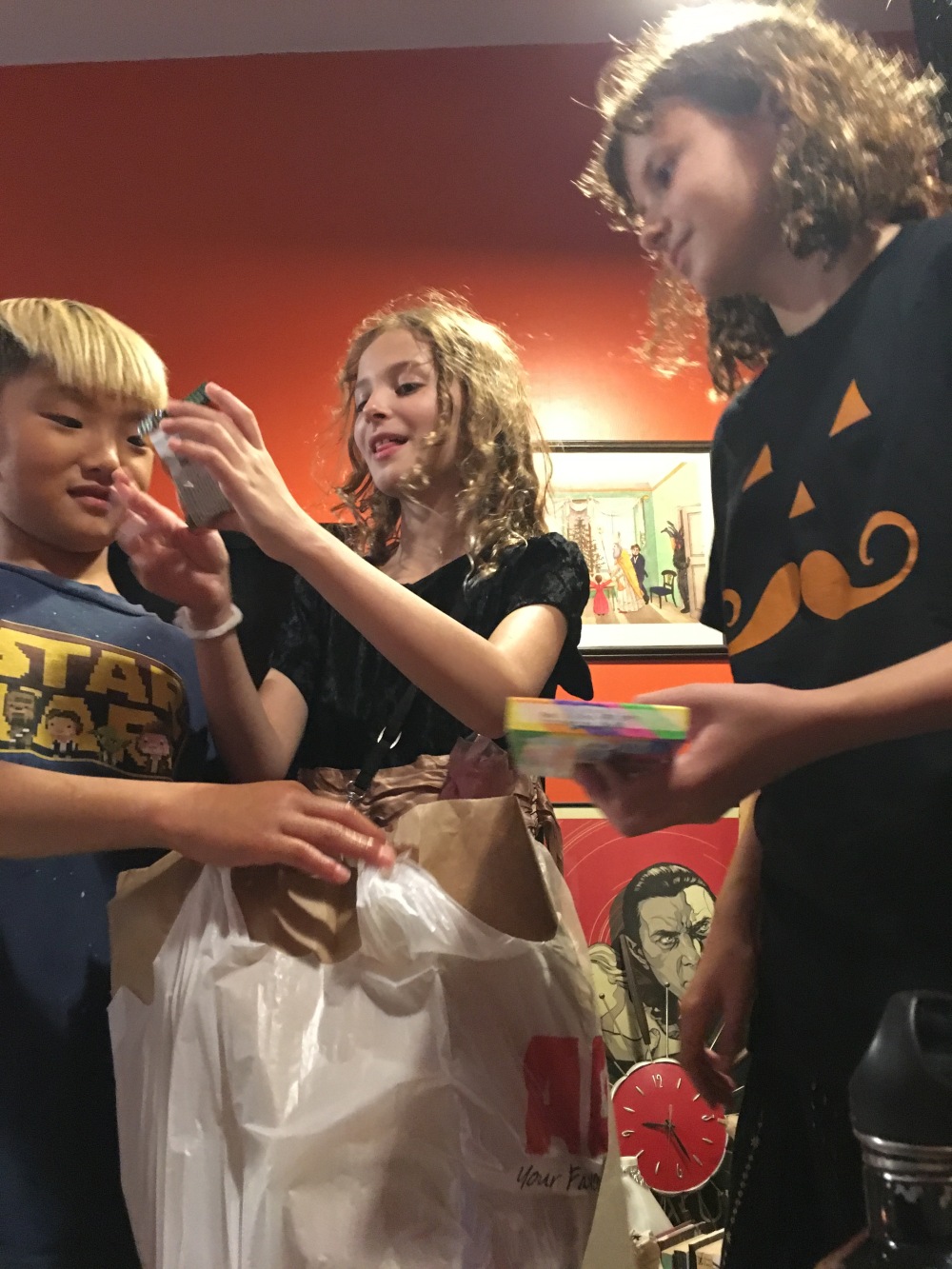 Through it all I kept thinking of the old John Updike story “A&P”, and picturing the girls (and why not Béla too?) striding through the supermarket in bathing suits, buying kippers or herrings or whatever it is the girls buy in that story.

Even though I wasn’t there, it was a really sweet experience.

I have one more thing I want them to do this summer as a “Final”; we have less than a week to get to it.