It was only a week ago at this time and I still had no idea, at this point on the clock, if we were really going to do it.

I had no idea, really, until Tucker got home from school, and Ben came home in the middle of the day, just in case. But then, it seemed, we really were going to do it. And Tucker and I headed off on Amtrak to Manhattan to see our heroes of Processional Arts Workshop let loose with their frost giant puppets. We knew we’d be going to witness something that would take half the time to experience as the travel time would — and that was fine. Because the kids weren’t with us.

I charged them with documenting pretty much every step of our trip, in a log and on a map Ben had printed out. It was a bit of an extension of their “Treasure Island” experience.

We were standing and looking at the Macy’s windows before I came to terms with the idea that we’d actually just LEFT and DONE IT. Homeschooling can make me a bit housebound — or I just go wherever the kids go. This was new.

We found the frost giants rehearsing unlit on a corner, and killed time in one of those bazillion nondescript little New York prepared food places called “Europa” or “Europan” or whatever, and had spanakopita and a Reuben and mushroom risotto — if we had been in a fancy restaurant the food would have tasted the same. It was great and we were cold and hungry.

We got gifts for the kids in the gift shop of the Museum of American Folk Art, where we easily could have spent a thousand dollars, but did not.

Once we saw them make their first round, we thought fast: kill three hours here or really high tail it to get back on a train? We chose the latter. Our work was done.

The kids had been mapping and detailing all the information we had been giving them throughout. 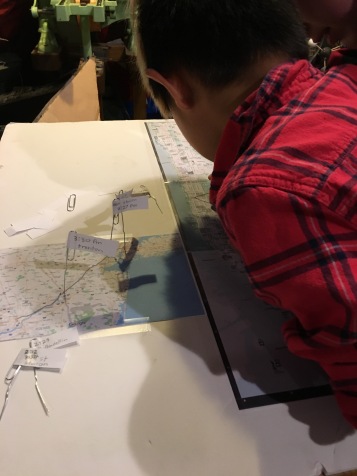 Worth every penny. And really it was very little hassle. It was just very fast magic in the middle of a Monday. And I was able to put it in the homeschool log!