Surprise, we aren’t a big sports family and don’t watch a lot of games. But it was exciting that the Eagles were in the Super Bowl and Jason Douglass’ Danceadelphia, which has been the kids’ studio since they were preschoolers, ALWAYS goes ALL OUT for EVERYTHING for Philly kids. Jersey-burning? Yep. Greased pole? Yep. I LOVE this video of my two… neither of them got it (they got to the top, but the can was duct-taped there and they could not get it undone) but they each “won” ten dollars anyway.

They enjoyed watching the Eagles win the Super Bowl, and were a little perplexed by some of the bad behavior shown by revelers that night. Having opened the front door to have a look at our street, Claudia said “I could smell the alcohol.” Well, yes. That’s Philly sports.

And very much the reason we did not attempt to go to the Parade today. Save those body spaces for some one who really cares.

Béla had a headache, which just progressively wore him down over the course of the day, but WITHIN this day — just today! — the kids and a friend

*Went on a semi-D&D-related errand to retrieve a bottle of capers from their friend’s house, since we were out of capers, and reported that the drunks from the Super Bowl Parade on our street “looked like the undead”

Given that these kids were 75% of the team that had possibly made the biggest disaster of a pretty pre-fab gingerbread house I’d ever seen back in December, I reminded them about reading ALL the instructions FIRST, which I’m still pretty sure they didn’t do. But the reality that they had a packet of CITRIC ACID in their possession was somewhat sobering. Somewhat.

(Wow. YouTube tagged this as “Comedy” without a moment’s hesitation.)

After THIS, I gave them each… a boxcutter! And a lot of cardboard and tape! And they did some Box Wars prep. 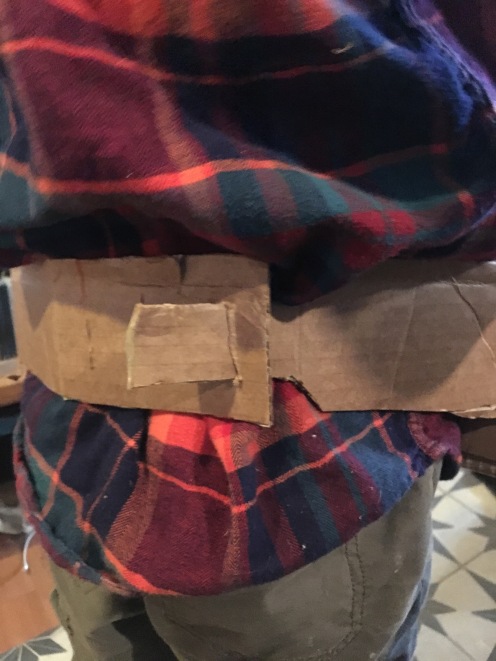 At some point they gave up and just watched TV (Béla before the girls. He really wasn’t feeling that great). I can certainly say they did NOT miss a thing by not being at the parade, and that we had a great day — I even made my first (very tiny and simple) chain maille project in a long time. It was just nice being with them all.