With some other homeschoolers we hang with in South Philly, a bunch of kids had gotten very deep (at least for a few weeks) into the idea of “Box Wars” — very hardcore, everything ONLY cardboard and tape. 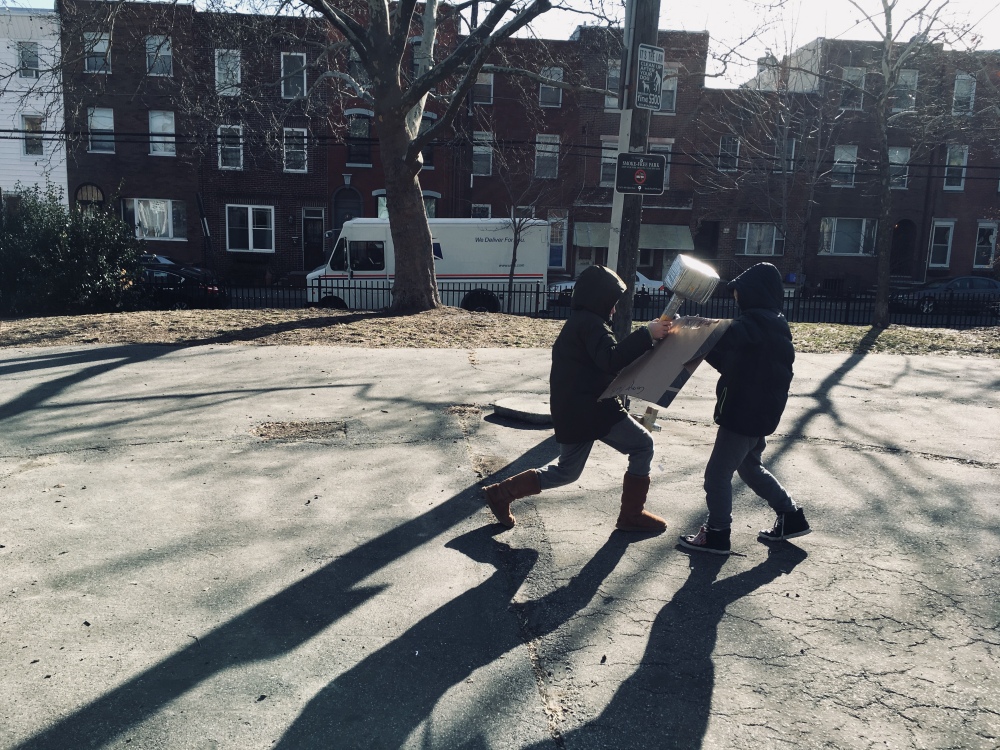 (The house behind the mail truck is the house Tuck lived in at the time we met him. He has officially lived here longer than he lived there!) 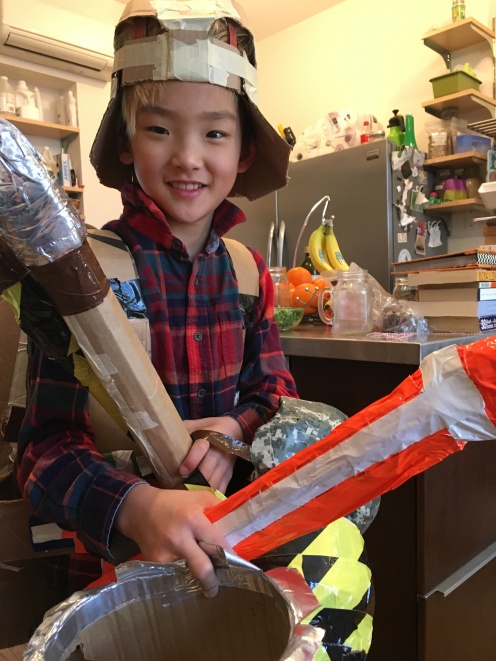 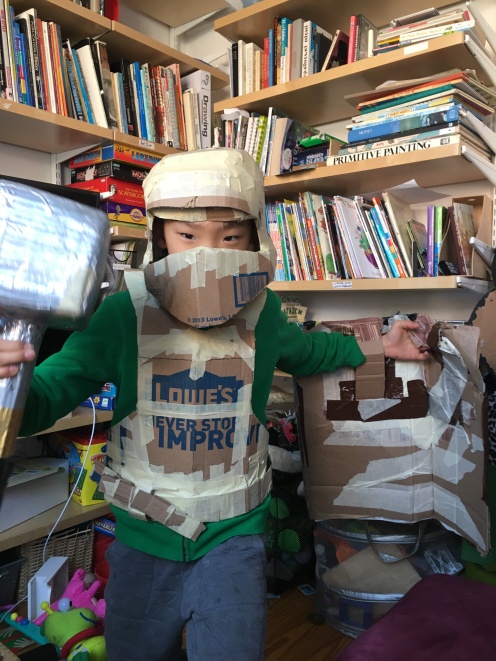 Béla and I started working on some cardboard chain maille — viable, but hard to produce at a reasonable scale. Luckily, the ingenious boy running these sessions has been really generous in lending the pieces he makes.

To avoid copyright issues, the group decided to refer to their activity as “Box Battles”. Claudia, having taken an online iMovie class, made a trailer.

Béla has had some ideas that have been brewing since his time at Epic Adventurez, and last year’s foam weapon-making classes with Chris and Stephen (which we have really missed — but the fact is, there are often just Too Many Good Things going on.) Béla’s idea would not fall in the parameters of a “Box Battles” weapon, as it is not cardboard, and we doubted it would be approved for Epic either. Still, it had to be made. It begged to be made. And so Béla and Tuck made sure they had it ready to debut at the Epic season opener anyway. It got it done and it made a good entrance.

While the concept of a magnetic break-away flail is a good one (and Béla’s!) this one needs some fine-tuning. The neodymium magnets we bought were so strong that they were literally committing suicide when we separated them, and rushing back at each other with such force that many split apart. and yet, with foam covering them, they do not have the weight to hold the flail and its heavy head together for a good swing through the air. 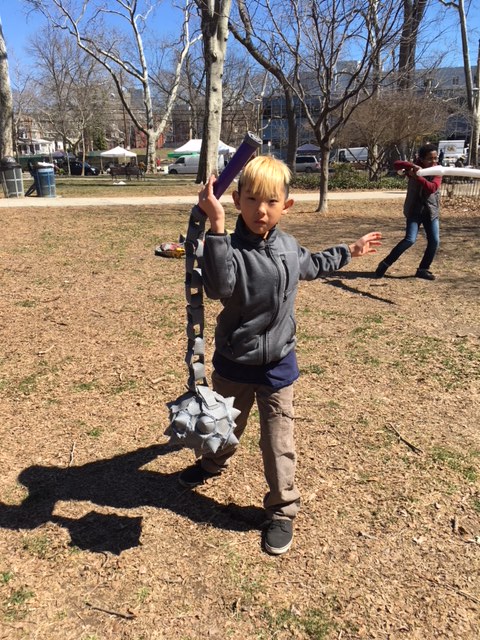 It looks so good though, that we feel we can use it in making episodic tokusatsu videos — for that, I’m sure SOMEONE won’t mind taking a hit (even if it’s just to their costume) and it’ll be worth it. The aesthetic is perfect. Béla has the spirit of an inventor.

And some maker/teachers worth looking up to. 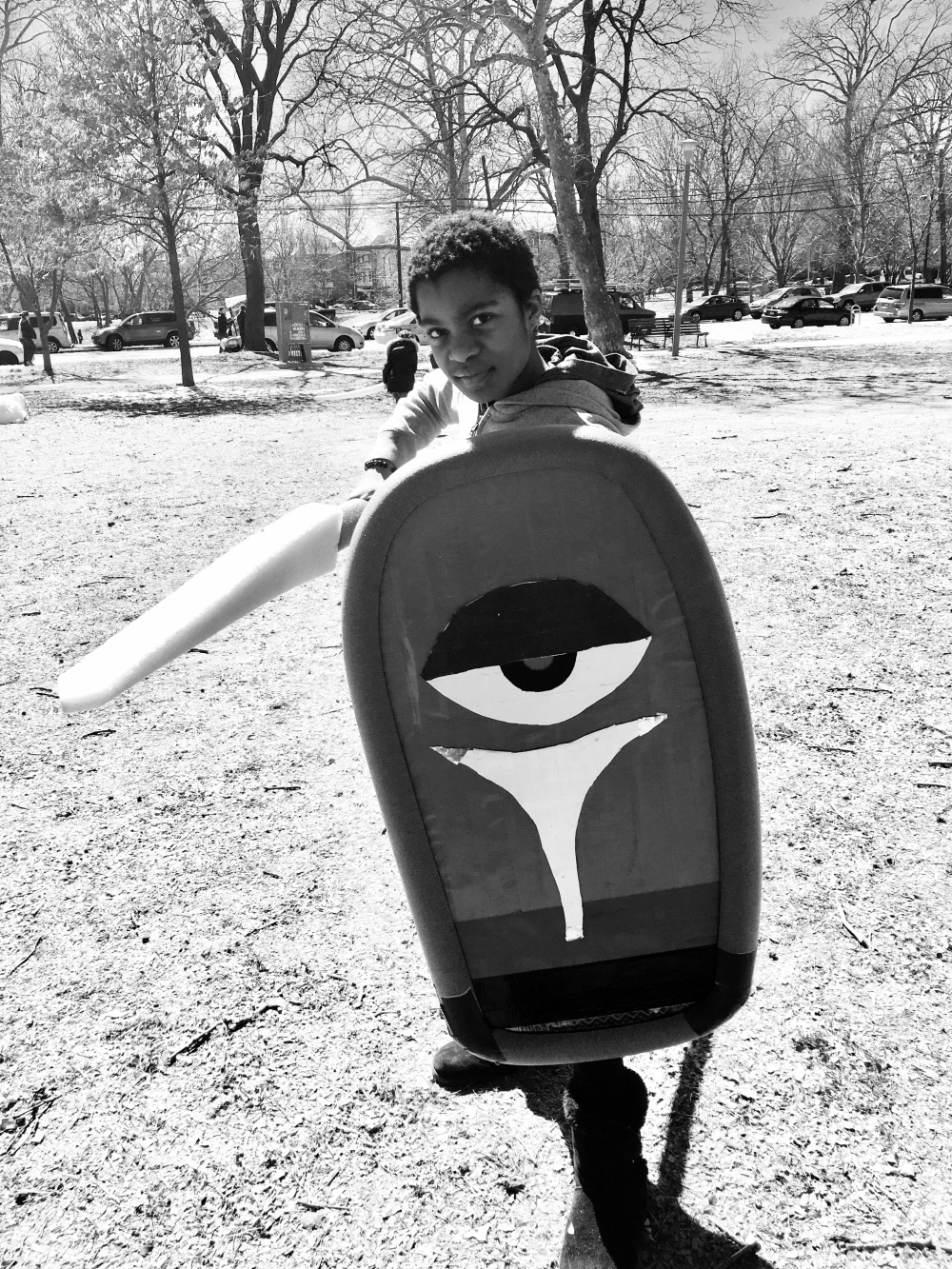