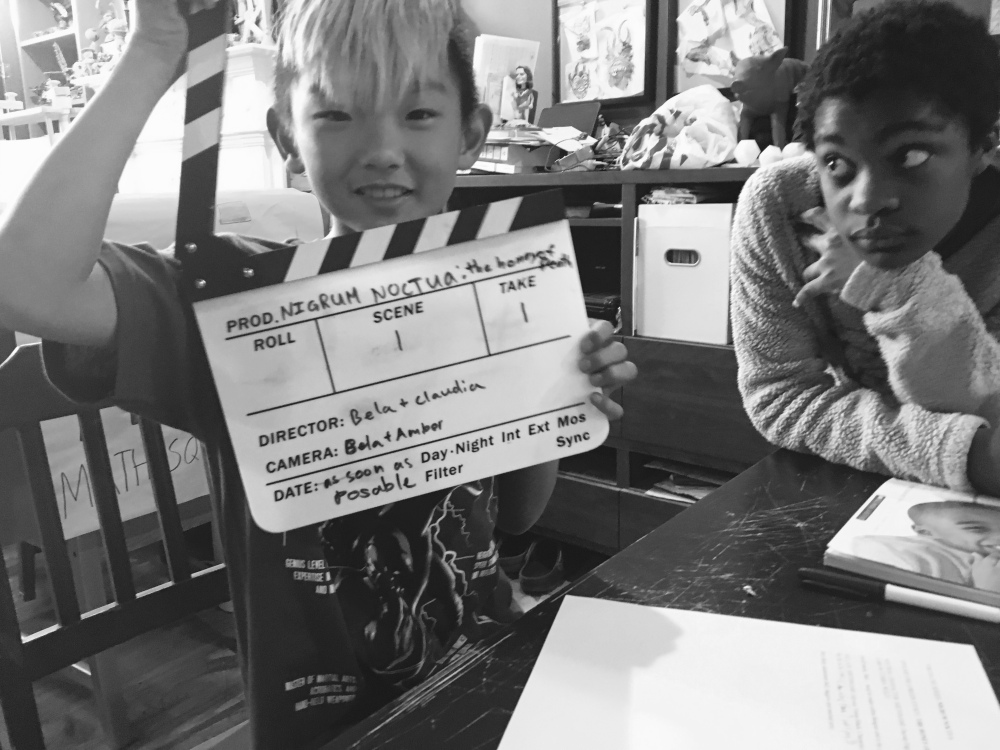 On the very VERY first day of “back to homeschool” in September of 2017, I told the kids that one of our MAJOR goals was to attend PhilaMOCA’s “Tokusatsu Tuesday” program every month, and to begin filming our own episodic toku program. Even if we only got one done!

“Even if we only got one done”, I said, as though to suggest, “but of COURSE we will do so much more than that.”

The kids only missed a single program of Tokusatsu Tuesdays, so on that score, they did really well. And we learned a lot. About origin stories. About taking whatever you had on hand and allowing those production values to either make your episode funnier, or better — but never “wrong” or “not enough”. We learned a lot about improvising. And we DEFINITELY learned that there is a point at which you HAVE to stop saying “We decided to change the whole story — we are just gonna write the whole thing again!” Because mama now knows that is bull, and is a way to get out of the next part of the job you don’t want to do — the harder part — the actual work. Starting over is always easier than digging in and continuing. I’ve spent all of our learning year watching this.

Now we’re in the eleventh hour, and NEED to come up with an origin story episode for our toku series. We’ve spent many hours and a few hundred dollars failing spectacularly at casting polyeurothane helmets. And re-casting helmets.

And casting friends. And re-casting friends. We’ve written character studies and origin stories, and then, re-written them. They’ve even shot some footage. (Which is, as far as funny childhood memories go, worth its weight in gold.)

Now the kids are in an Outschool creative writing class aimed towards creating diverse fantasy characters. It has an enthusiastic teacher, and students with great senses of humor. And since Claude and Béla really have writing assignments for generating characters, we have been able to do double duty, and get their Outschool work done as well as prepare for our Toku premiere: NIGRUM NOCTUA, “The Honey of Death”.

Béla began with the fleshing out of his character, a neutral-alignment character.

WHAT IS THE MIX: Wolf and Cobra

PERSONATILY: Will get really angry! Has a strong tail. strong bite. claws­­­­­­­­­­­ that tear and rip. It can also turn in to a human;27 year old man. He usually is dressed in a dark red and black hoody and random pants!!

When in animal form he has scales on his chest and tail and fur on his arms and legs! He also has a cobra hood

Fel Lupum lives in dark woods and on top of houses! He also is adapted to the dark! He also knows how to suman to be a human man! he love to sneak in the dark! He is not good nor bad but is protective of innocent people!

He only protects his territory! 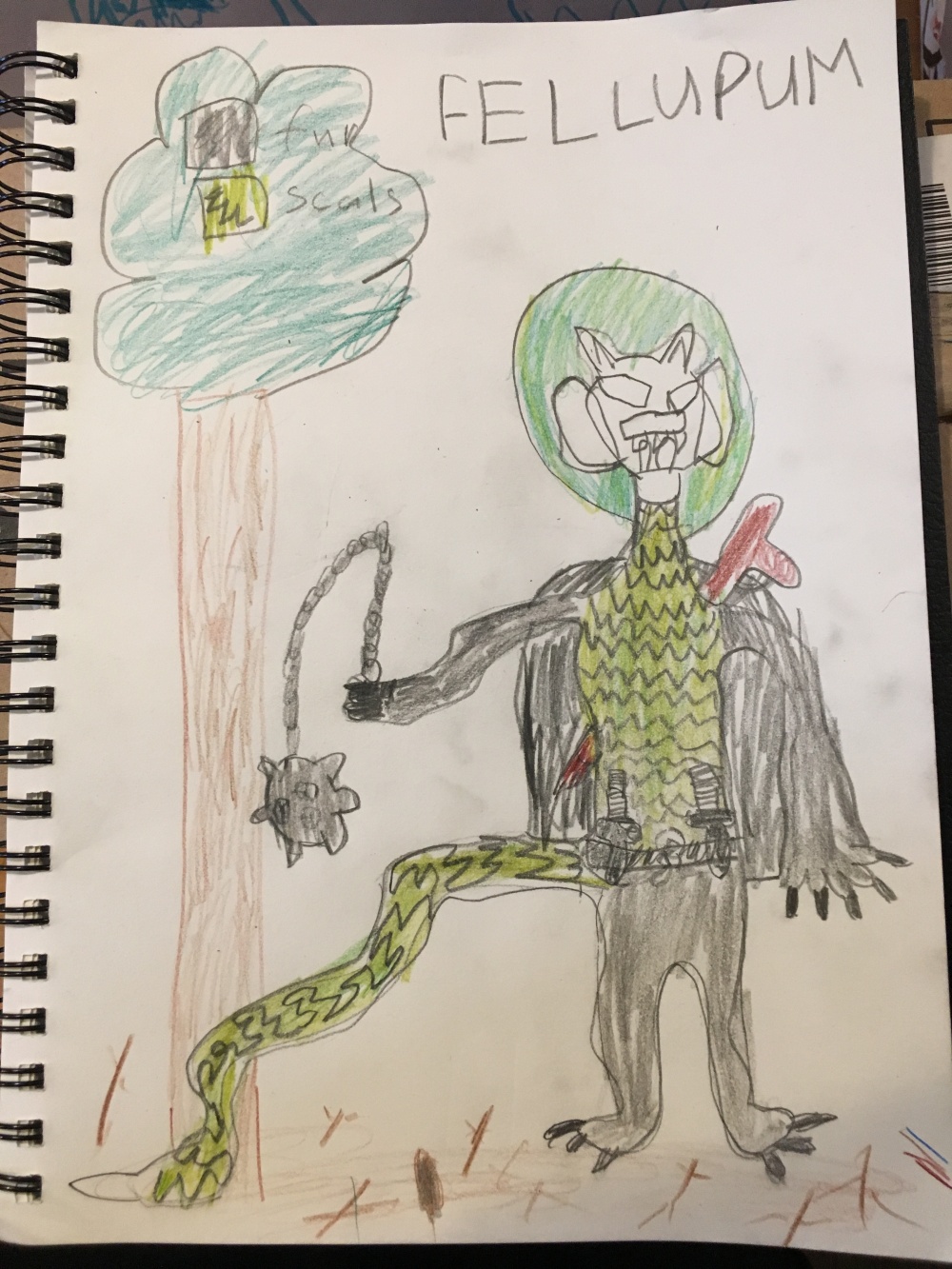 Claudia did not yet write about Nigrum Noctua, but focused instead on a ghost hound who sounds like they’ve been purchased at Ikea.

WHAT IS IT: ghost hound

ABIILITIES: can grow real claws and a tail that can grow spikes

PERSONALITY: Skaltorn is for defeating good and bringing evil

She can throw her talons and grow real claws. Her master Necro-tail-roe

(master of darkness) dwells in Darkness and the Shadows, same as skaltorn.

Her master says that Skaltorn is meant to defeat good and bring evil. (Skaltorn

is a Ghost hound.)

SKALTORN AND THE CRECENT MOON
Skaltorn -the silhouette, the night prowler, came across a crescent moon, She knew why it wasthere and passed right through it. On the other side was her master wrapped in chains and around him were the crescent walkers – the witches of power. Skaltorn leaped onto one just as it threw a spell at the place Skaltorn had been. PONG! Smoke erupted and the snakes of Death
swirled out and bit nothingness.
Skaltorn had had all the crescent walkers in a pool of blood. Necro-tail- roe, Master of Darkness got up and looked at the floor and said “what a mess” “AHOOOO” said Skaltorn. From under a black veil a crescent walker hit the Gong but not before it saw Necro-tail- roe and screamed so loud it pushed Skaltorn and Necro-tail- roe across the room…!

So, as you see, we are getting somewhere. We have characters, three original songs (including theme music), a partially animated credit sequence, and a cache of special effects just waiting to be used — most of them which have been sitting around the house in craft bins for, in some cases, years.

Claude began using a cedar-wood crankie shadow puppet backdrop we had bought as a kit, to make a scrolling credit sequence for the episode. Béla was excited about scoring some incidental music, and got to work on his Korg mini. (We have been planning some live scoring for our D&D games, which will be picking up in frequency within a week or two when Tuck’s classwork is finished for the year. Live sound effects and real-time scoring are a different thing than “songwriting” or anything the kids do as a “band” — and I like that and suspect there is much to be learned from that differentiation.)

Béla and Claude also made, with Dad (and Adafruit Industries), MintySynths — little synthesizers in Altoids boxes.

Since their only option was to use headphones or to fight over Tucker’s single tiny speaker that he uses for biking, I “broke down” and got them each an adorable, mid-century-design little 9v amp… with a belt clip. Yes, I’m picturing them busking in Penn Station and am sure I will make the $22 for each of these amps back in a few hours.

I have a feeling the MintySynths will be part of the incidental music for this project as well.

So we are, now, further along into this project than we ever have been before. It is daunting. It has characters and something of a storyline, but no real script yet. (Luckily for us, we’ve spent all year watching tokusatsu, and we can say it SEEMS like that’s true of plenty of the best of them.) We have a few big costume pieces to make, but also have a lot ready to go — and they’re going to have GREAT effects. (NEVER underestimate things that light up. Well — I can say I know this in real life, we may find it’s not so easy on video.)

Locations? Again, if there’s one thing we’ve learned from all these months of viewing at PhilaMOCA, it’s that a patch of dried grass will do just fine. And we live right across from one!

Shooting? They’ve been practicing quite a bit with their iPads. Editing? They took an Outschool class in that, too, and, again — Good Enough is EXACTLY the aesthetic we are going for, and they can pull it off with real authenticity. Original music? Almost more than we know what to do with! (Here’s a teaser — the theme song!)

(Those are vocals by Claudia, who also used a vinyl recording by Delia Derbyshire — whose work the kids are studying this year — on a scratch deck. Delia Derbyshire was the composer of the iconic Dr. Who theme song and I bet she’d be proud to be involved with Nigrum Noctua as well.)

The kids’ end-of-year gift was a new iMac, with a big screen and a lot of space, for running GarageBand and iMovie.

So — can they do it? Before the end of, say, June? Roughly around the time the District asks for all homeschoolers to turn in their documentation? (Believe me, this is NOT the kind of documentation they are looking for… but it’s nice to set a goal.) I cannot believe it was early SEPTEMBER, the day I spent with C and B when we we wrote on the whiteboard that it was a goal for the year to begin a toku series… and here we are… REALLY just getting started, but moving ahead with so many pistons firing that it’s impossible not to be excited. What will get done tomorrow? JUST TOMORROW? When only this evening, one was typing out a character synopsis while one was hand-lettering opening credits… it was a beautiful parenting moment. They’ve done all their “big guns” academics for the year — this, Mendeleev’s Madness, and Treasure Island, is what we have left.

Our goal is a single, origin story episode, about ten minutes long, and a teaser clip to preceed it. Our neutral character is as close to a hero as we get — that’s Fel Lupum. For villains, we have both Nigrum Noctua, and Skaltorn. I don’t know that any of them have met.

I’m sure we have our share of editorial and logistic challenges ahead of us.

Here, though, I think is an important pre-emptive statement (I’m not looking in anyone’s direction, but I want to be clear):

We are always THRILLED to have C and B’s friends be part of their videos, “podcasts”, whatever! Content creation is a big part of how we homeschool (or unschool). But C and B are performers — they’ve been in music videos, and their performances with School of Rock, Jason Douglass Danceadelphia, Parade of Spirits/Lux Arati, and Omo Kulu Mele can show up online any time. The tokusatsu videos we make for this project WILL be shared via YouTube and social media. If that’s not something you are comfortable with for your own kids — C and B will be available to play another time, for sure! But we can’t try to do the work involved with this kind of multidisciplinary project AND try to keep pals OUT of the shots (particularly when they are asking to be part of it!) when their parents don’t want their kids’ images online. Anyone can watch, but it’s a project where participation really does require parental approval.

For all our grown-up friends who love making costumes, making movies, WATCHING movies: WE WILL HAPPILY TAKE YOUR CONSULTATION. Anything you got.

In the meantime, though, it seems like there’s plenty for us to do.