Last year, it being our first homeschooling year, we did a big shoot with a location, an infamous drag queen, and a well-known photographer (although both those folks were also friends.) That photo session was even made into a small book!

This year has been a much more contemplative year, with some serious family issues, and a much harder one during which to plan too many bells and whistles when it comes to the creative. But I had two really strong photos in mind when it came to what the year had meant, when it came to the kids and how they had grown.

Claudia’s photo looks so peaceful and fresh and contemplative, you’d never guess she’d been in a salon chair for six hours and was boiling hot waiting for an Uber, with about twenty new pounds of synthetic hair knotted into her scalp. It was her first experience with hair extensions — we even went to the “hair store” with the ladies from the salon — and while she looked gorgeous, it was a six-week or so experiment to have all that extra “hair” and and we are both glad it’s over. For me, it was like seeing her age ten years overnight, and it was heartbreaking. I could not put my nose into her hair and smell her head, and that was beyond heartbreaking. She looked lovely; the hair was great for dance recital season (which, thankfully, we have weathered and completed with the expected grandeur. Whew.) But she is now back to her short and curly. I would love it even shorter — Grace Jones-style — but she’s not having it, yet.

I had not really wanted the extensions. I have always been about natural hair. But she had yelled, “THIS IS MY CHOICE,” and that was that. (It wasn’t her two hundred and fifty dollars. The next time, she knows, will be.) (I had even bought a special xenomorph-shaped bathing cap, and she never actually got in the pool with it. But, maybe there’s a next time.) She can keep it short or she can grow it out and lock it… but “hair life” has never been something we had the time or energy to fit in, and we certainly can’t do it now.

But look how beautiful she is! And she did love how her hair looked. The first night, however, she cried going to bed… couldn’t figure out how to put her head down. (Over the weeks, the twists flattened down somewhat.)

Béla’s photo is so simple — but he’s so independent in it and it’s so unposed. You can see the heat in the air around him. Those muffins are coming out of the oven! It’s a recipe he got from another and is rather fantastic in its simplicity — Bisquick, applesauce and water — and now they can both make them from beginning to end on their own. Béla spent a lot of time in the kitchen this year — he’s good at it. He understands how some recipes can be doubled successfully and others cannot. He has a good sense for putting certain flavors together. Nobody seems to like to take the responsibility for washing muffin tins, but that includes me, so what are you gonna do.

These are the pictures I like the best. In a way, the learning year started out rather “glamorous” with Theatre SKAM and “Fashion Machine”, but it had such a distinctly different feel from last year. Even though both kids do so much performance-related work, the real “work” of this year was quieter and more turned inward. I include this photo of a wonderful piece of modular origami by Béla: 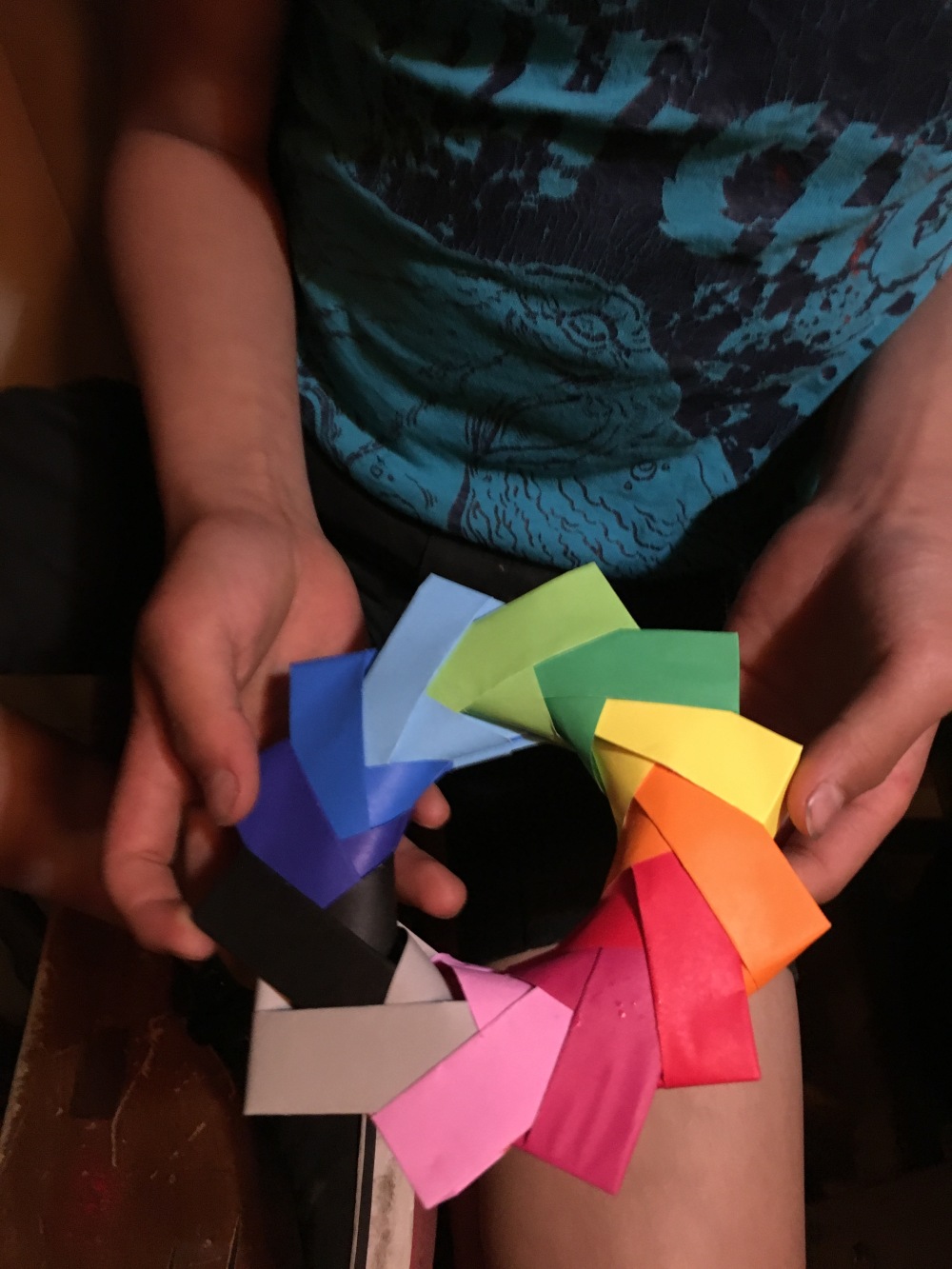 and the featured drawing by Claudia, which seems to be Athena giving birth to herself.

These first few weeks of summer break have been a lot of VERY hard learning — a long time in coming, but really starting to work — about time management, and learning how to not look to Mom for entertainment or activities. How practicing for the show you’re in is sometimes best done in the hottest part of the day, when you can’t possibly go outside anyway, rather than at 8pm when you’ve put it off for hours and now want to be deep in imaginitive play, but now people are yelling at you to practice NOW NOW NOW — yeah, time management has been tough. Knowing that some days will be eight hours of friends and play, and some days will just be days home with the computer, and books (and a million instruments, and games, and anything else they can come up with…) is finally dawning on them as a reality of what Summer IS. Thank heavens. Because them not knowing this (to whatever degree of willfulness) as long as they did) was going to be the death of me. If you’re going through Hell, as it is said, keep going.

It’s still a few more weeks until their first week of summer day camp, of which they have three, all non-consecutive. I’m sure they will enjoy and appreciate them all. And I love their pictures this year, and the realness of them, and the sense that my kids are learning how to live their lives so that they get the most out of them for the people that they are becoming.