Tucker wouldn’t know how to have a quarterlife crisis if you drew him a map to it. Plus, he’d probably tell you that as an autistic person his life expectancy is 54, so you lose, his quarterlife was some time ago and your joke is as stale as some Catskill comic’s.

It’s really hard to get Tucker down, is my point.

Once we had cheerfully spent his birthday gift money on tickets to “The Lightning Thief: The Percy Jackson Musical”, which we saw last night (and since seeing the kids enjoy themselves is one of Tuck’s favorite things, it was a good investment), we got down to business on a homemade gift as well, which is always nice, particularly for a “big” birthday. Since the “homemade” “gift” of his last “big” birthday was a haggis, Claudia was more than happy to put some sweat equity into anything that wasn’t that. She and Béla have been taking weekly Astronomy/Astrology lessons from our friend Keren, and we decided to make a natal chart — written in the language of the kids themselves (as well as drawn by, and written out by them).

Again — why use words to describe. It’s so beautiful and they did every bit of it themselves. Did I think it would take THREE 11″ by 17″ frames to contain it? No — and it will be a challenge to find a place to display — but oh my gosh. Having just closed out the U-Haul unit containing the last of the belongings from my father’s home, there is nothing as creative, personal, or loving to be found in those boxes as this is.

Tucker is not someone who enjoys being given gifts — after being lured Eeyore-like into the room where he knew the gift was, he went out of his way not to face it for some time — but then turned red and smiling. He loved it. The KIDS loved it. They are so proud. They have been doing such good work with Keren, and really learning so much — this project is just a portion of what they are studying.

(When Béla gets out his own camera, you know he is proud.) 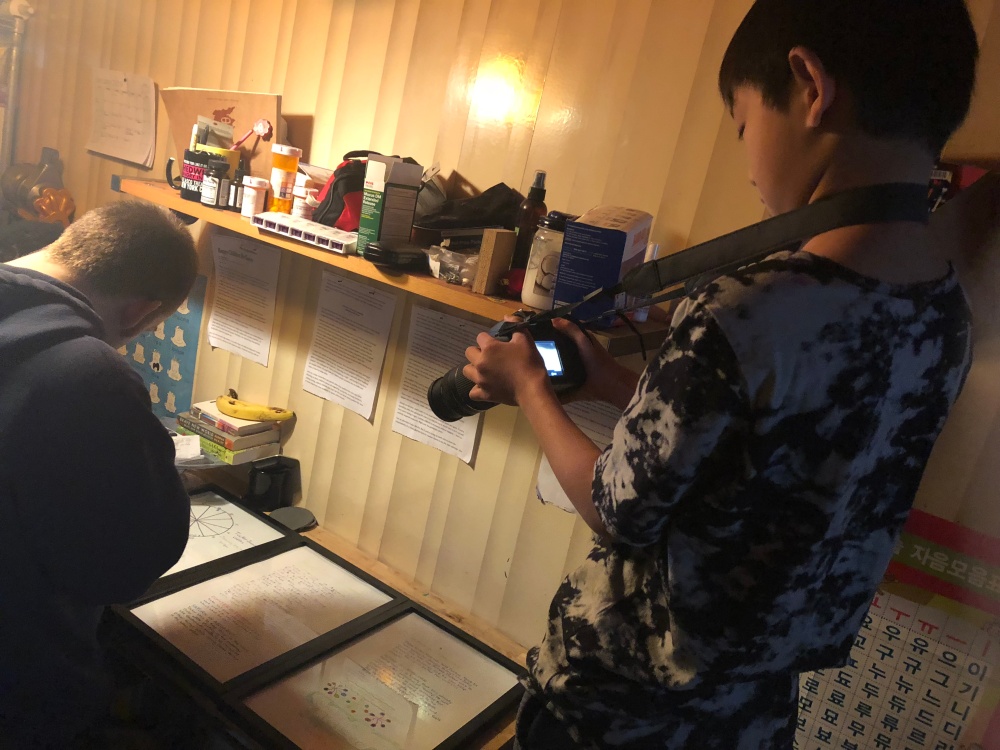 Sushi for dinner later, but the kids have a date to play chess and make cookies with a friend first. Tuck and Béla are putting together Béla’s 007 Aston Martin in Lego. (Tucker: “Spiked tires? 007, think of the children!” Béla: “Or not.”) Claudia’s in her Sims Underworld. All is well.