We are very big fans of Greta Thunberg and we loved watching her cross the Atlantic and we listen to all her speeches and interviews (the kids were boundlessly excited when she talked to Trevor Noah.) And so of course we were going to the Climate Strike! We’re always on strike!

We had to meet with our friends with Extinction Revolution — which, by coincidence, includes one of my favorite friends from senior year of high school, so I get to be a total goofball.

We had tried to make repairs on Greta the Tardigrade and take her up in Cameron’s truck but as soon as we got to City Hall we realized we would have been going NOWHERE with Greta — she looks too much like a Thing hiding a bunch of other dangerous Things. She would have promoted much suspicion and taken up a lot of space. And XR had plenty of signs, and banners, and flags for everyone. Claudia and Béla had made their own signs.

After the complete march through the heart of Center City, we made it back to City Hall to basically play This is Your Life. We ran into Joe Cox, but how can you not! 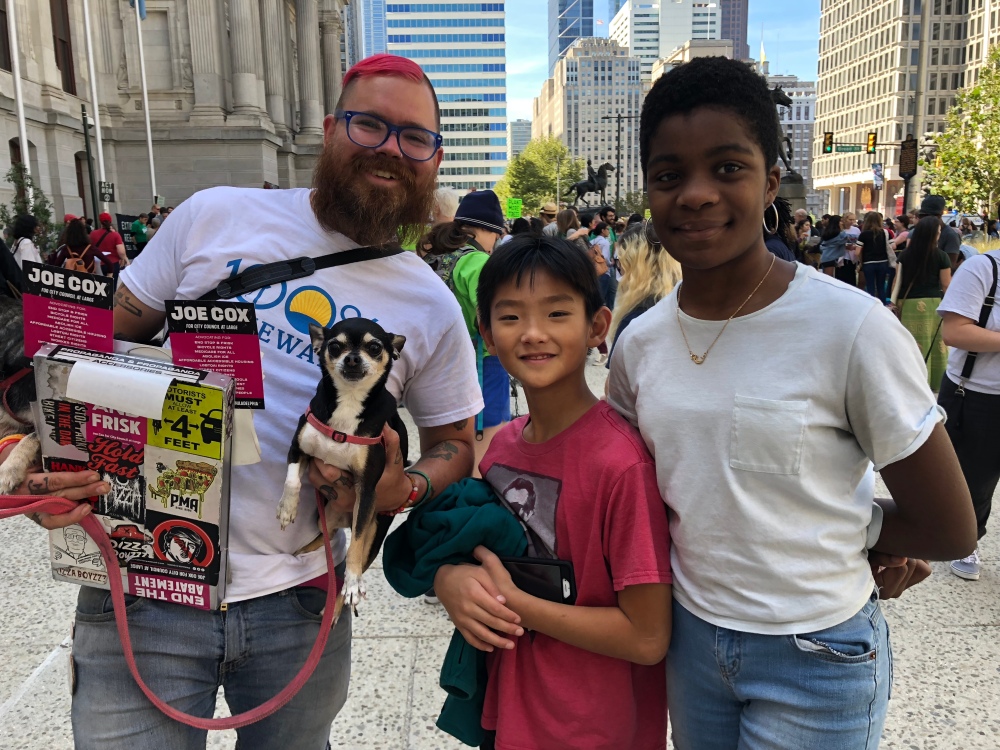 We ran into Claudia’s vocal and bass teacher. He was with someone who identified herself (then I recognized her) as someone who had choreographed the kids in a Fringe Festival show a few years ago (or maybe last year? I can’t remember! Too many Things!) I ran into another friend, and then — I saw a guy in an IDLES t-shirt! Which meant I had to go hug him and hang out, because even Kerrang magazine will tell you that IDLES fans are the nicest people in the world and always hail one another! 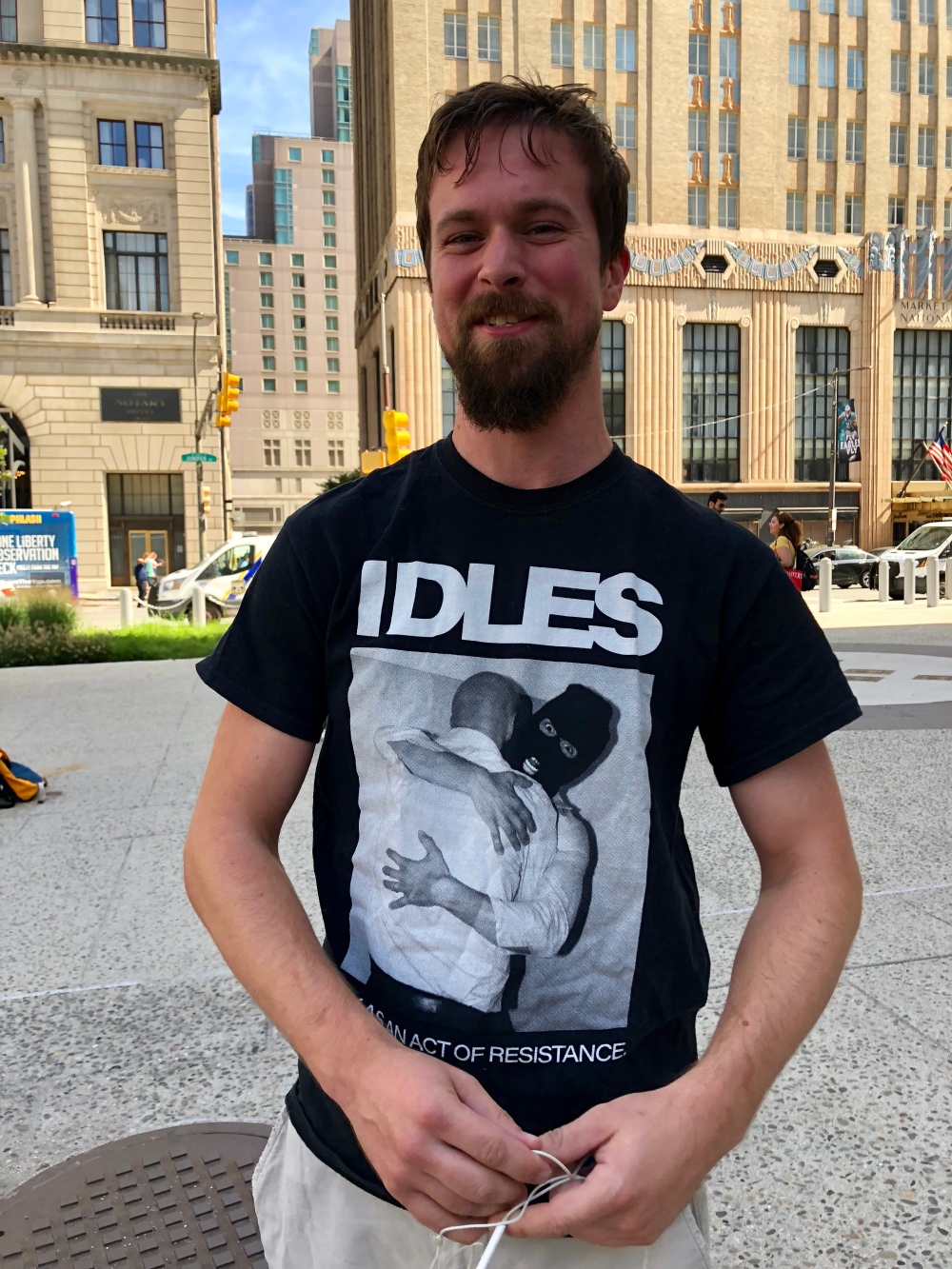 We were so hot and tired, we went to City Diner for lunch and had HUGE glasses of lemonade and more refills than I can count.

Nobody thinks they are bringing their children into a world where they can’t tell them if they write a book or a symphony, there will be anyone around in five hundred years to read it or hear it. And we have not painted any pictures that specific; what they see and hear is plenty. But I am proud of their realism and that they want to change the things they can, and stay aware.

Béla had this to write about climate issues, adding “I tried to get across the message without sounding too aggressive… even about the President.” (I have left in his missing word at the beginning, as dropping words is one of his calling cards and I’m following it. I think it was Stephen King who said spelling errors are like fingerprints; I’m finding all writing errors to be so. Tucker would likely say the same of their math errors. I still think this shows Béla’s very attractive flow of voice, in writing and in speaking.)

I know as an 11 year old that the climate crisis will affect me if we all do not do something. Many adults keep doing they think “ Oh I do not care I will not be alive so whatever”. I think if older people ( generations too) do more then everybody will do more. The climate crisis affects the whole world. Pollution, fossil fuels do not help at all.

It will affect me in my adulthood if things do not change. Philly government needs to be doing more. And we need a President that believes in the crisis. Trump thinks it is not real and it is a fiction. I have been fighting since I knew about the climate crisis. At the Climate Strike I stood there next to a friend to fight. I will keep on fighting because I want to look back at my life and say “ Yes i fought the crisis”.

Greta Thunberg is a climate crisis hero . She let the world know. After kids “ woke up” they started to fight . I hope you will too.

Claudia is always a little more removed, particularly from issues that are a little triggering for her.

The Climate Crisis is a big problem around the world that could destroy it. It has to do with our carbon emission use and greenhouse gasses along with many other things.

I don’t like how our species has acted. We pollute so much of the world. Some parts don’t even get sunlight.

I have stopped eating a ton of meat because the meat industry is bad for the planet. My family and I try to use less water and less electricity and eat less bread.

What I know about the crisis is that we only have about 11 years to change things and if we people don’t change the way we do things everything on Earth will die because of us.

I don’t think the crisis will completely ruin my life, but I do feel like if I don’t help, other people’s lives will be ruined. I’m concerned that our President doesn’t care that we are all in serious danger and hopefully we can get a better President soon who actually cares about his or her people.

On Friday I went on a Climate Strike march around City Hall. Greta Thunberg did this alone last year and since then she has become a living hero like Harriet Tubman. To help save the planet I will drive less places and walk more. I will make sure to not fly anywhere anytime soon.

I hope that one day like super soon the government will see that our world is ending and the countdown is 1 year. I hope that this never comes to the end of the world but if it comes I’m ready to fight it so that the possible generation after ours can make the world better.