OK, for the next few days, I think I have to give up. They may let me read aloud to them; they may play a board game or a small family game of D&D with Tuck; but we aren’t getting any schoolwork done for a few days. (Maybe I can get Béla to finish editing his cooking video.)

Both kids walked with a friend this afternoon to the grocery store for snacks (as if there aren’t “snacks” here) and then the girls played Sims for hours. 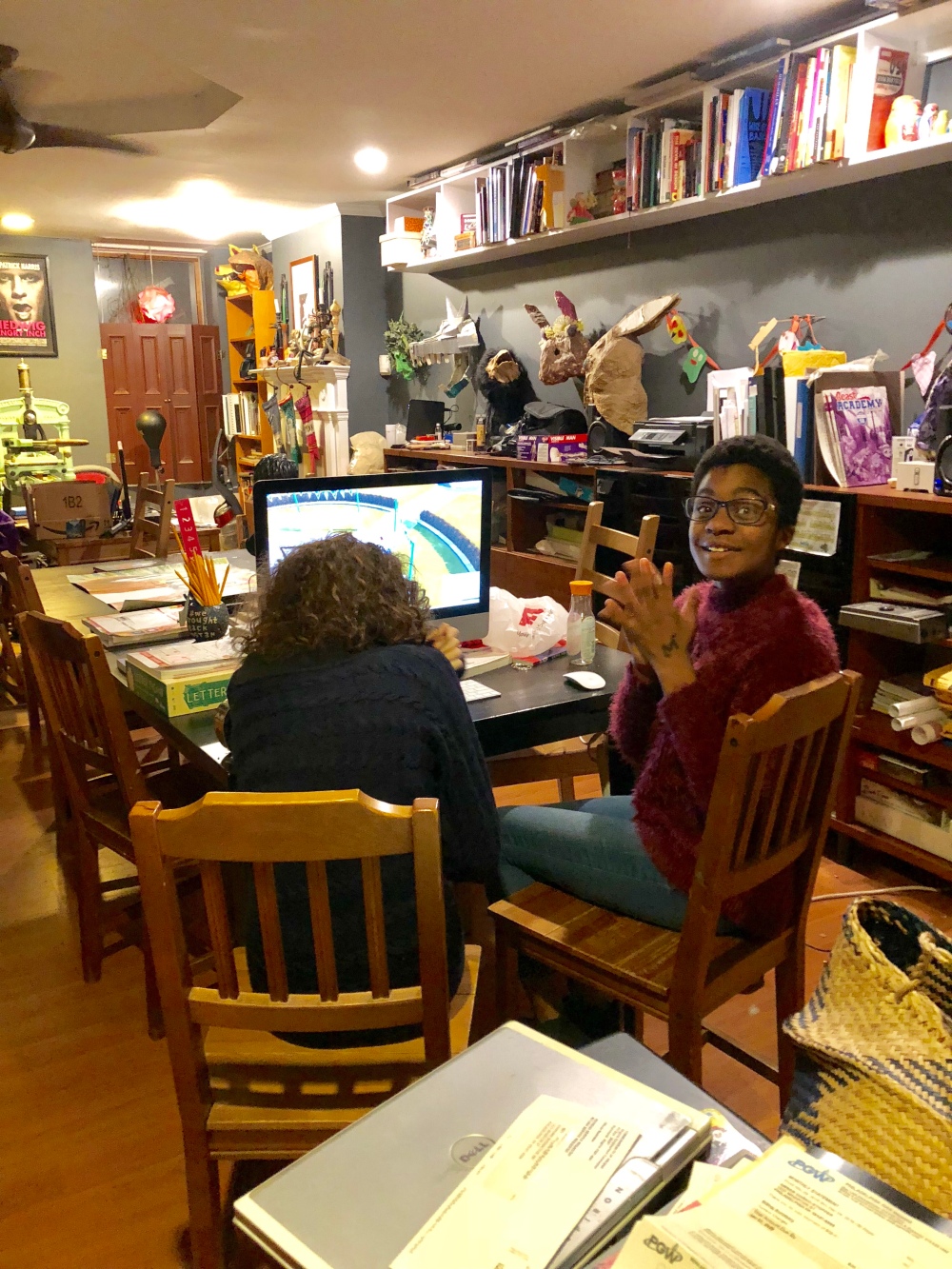 Béla was happy to catch up on some YouTube channels he likes. He had also had a rewarding morning; he met his Big from Big Brothers, Big Sisters. I had done initial inquiries and filled out paperwork for them last February. I felt that they could each use a person to spend time with entirely outside of the family dynamic, that was JUST their own, and who could share either a racial or other orientation and be a private, personal mentor a way I couldn’t serve. (I had found a “group” of adult Korean adoptees (two) at one point, who “mentored” younger Korean adoptees; that fizzled out after maybe three meetups.)

We have been waiting ten months with BBBS because we wanted to have the kids matched as close to the same time as possible. Claudia has been given a match but her Big’s clearance paperwork is not finished, and so Claude’s meeting did not happen today, only Béla’s. But it was pretty darned great.

Philadelphia being America’s largest small town, we had noticed when we had been given some very basic information about Béla’s big, that there seemed a possibility he had actually come into our orbit years ago, as someone who helped Tucker in an academic/professional situation; on meeting him today, Béla’s Big clearly remembered Tuck. When Tucker picked us up after the meeting, it was confirmed.What are the chances?

And, even without that amusing happenstance, the Big and Béla seem like extremely good matches and will spend time together next week. I think this is going to be a huge help to both kids, to have an adult with them who values their input when it comes to how their time is spent. From what I have seen of BBBS so far, I am impressed.

Béla has been helping me keep the tree refilled with paper ornaments and is picking up chenille worm casualites, as we’ve given up and decided to just allow Marble to own the tree. She dive bombs directly into the center of it, tossing chenille worms everywhere.

Danpung has not eaten her new bed yet and seems to love it.

Last night we used Hulu to watch the Eddie Murphy/Lizzo episode of SNL we had missed, and which everyone was talking about.

Claudia was GASPING for air at the “Mr. Robinson’s Neighborhood” sketch. When the “Squatters’ Rights” sign appeared — squatters’ rights are something that Claudia takes a very personal interest in when it comes to areas in the house — she was almost levitating. She kept choking out, “I know I should not be laughing — this is so racist — but — but –” … I guess I now recognize that she has not seen racial tension diffused with comedy the way artists like Eddie Murphy have used it. We seem to have inherited a DVD box set of Richard Pryor standup — I may need to dig it out.

And of course Lizzo was amazing.

Rather than getting all the “Christmas foods” and eating them alllll on Christmas Eve and Christmas day, we have just sort of made a week of it. We’ve had some good meals and a lot of TV. We have a special dinner planned for tomorrow night and are super excited to hear that Yorkshire pudding batter hit the fat. Silly pajamas are wrapped in Black Panther wrapping paper (the one gift they get to open on Christmas eve), and Tuck went to Kensington today to retrieve our Johnny Sokko and his Flying Robot DVDs from our friend Paul. We have checked many of the holiday movies off the list — including, for Béla, (Claudia was not as interested), The Godfather.

I find that Christmas just sort of happens by itself and you don’t have to wear yourself out trying, and so I am feeling pretty relaxed.

It does not seem like we will have finished reading A Christmas Carol out loud by actual Christmas, not of this year. And I had been so hopeful. But they are not sitting still for any school-like media right now, not even MasterClass.com.

That’s ok. No other kids in Philly are now, either!